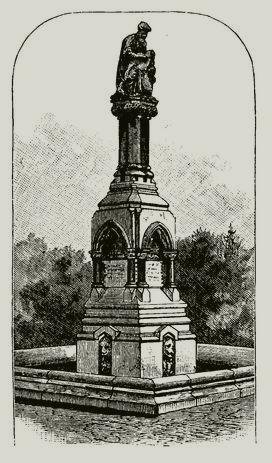 MORTON, William Thomas Green, dentist, born in Charlton, Massachusetts, 19 August, 1819; died in New York city, 15 July, 1868. He early left home to enter business in Boston, but, being unsuccessful, went to Baltimore in 1840, and there studied dentistry. In 1841 he returned to Boston, where he introduced a new kind of solder by which false teeth could be fastened to gold plates. In his efforts to remove the roots of old teeth without pain he tried stimulants, opium, and magnetism, but without success. Meanwhile he attended medical lectures, and studied chemistry under Dr. Charles T. Jackson (q. v.), in whose laboratory he became acquainted with the anaesthetic properties of sulphuric ether. After experimenting on himself with this agent, and becoming satisfied of its safety, he administered it to a patient on 30 September, 1846, producing unconsciousness, during which a firmly rooted bicuspid tooth was painlessly extracted. Other successful experiments followed, and he communicated the results to Dr. John C. Warren. This new anaesthetic was first publicly administered on 16 October, 1846, to a patient in the Massachusetts general hospital, from whose jaw a vascular tumor was removed by Dr. Warren. From this operation dates the introduction into general surgery of ethereal anaesthesia. In November, 1846, Dr. Morton obtained a patent for its use, giving to it the name of "letheon," and a month later he secured a patent in England. He offered free rights to all charitable institutions throughout the country, but the government appropriated the discovery to its own use without compensation. Various claimants opposed his right of discovery, notably Dr. Jackson and Horace Wells, and the matter was investigated by the French academy of sciences, who decreed one of the Montyon prizes of 2,500 francs to Dr. Jackson, and a similar award of 2,500 francs to Mr. Morton, for the application of the discovery to surgical operations. His claims were so earnestly opposed in Boston that his business was entirely ruined. He applied to congress for relief in 1846, and again in 1849, strengthened by the action of the trustees of the Massachusetts general hospital, who conceded to him in 1848 the discovery of the power and safety of ether in producing anaesthesia. In 1852 a bill appropriating $100,000 as a national testimonial for his discovery was introduced in congress, with the condition that he should surrender his patent to the United States government, but it failed, and he was equally unsuccessful in 1853 and in 1854. Testimonials crediting him with the application of ether as an anaesthetic were signed by the medical profession in Boston in 1856, in New York in 1858, and in Philadelphia in 1860. The last years of his life were spent in agricultural pursuits in Wellesley, Massachusetts, where he also raised and imported fine cattle. Mr. Morton received, in addition to the Montyon medal, decorations from Russia and Sweden, which are now deposited in the rooms of the Massachusetts historical society. See "Trials of a Public Benefactor," by Dr. Nathan P. Weyman (New York, 1859). The illustration shows the monument that was presented by Thomas Lee to the city of Boston in 1868. It is placed in the Public garden and bears the following inscription: " To commemorate the discovery that the inhaling of ether causes insensibility to pain. First proved to the world at the Massachusetts general hospital in Boston, October, A.D. MDCCCXLVI." On each of the sides is a marble medallion representing the physician and the surgeon operating upon the sick and injured, who have been placed under the influence of ether.