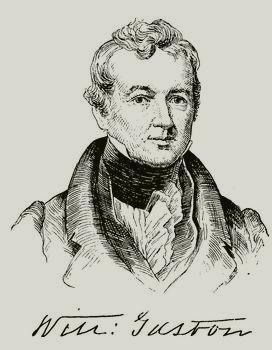 GASTON, William, jurist, born in Newbern, North Carolina, 19 September, 1778; died in Raleigh, 23 January 1844. He was the son of Alexander Gaston, an eminent physician of Huguenot descent, who on 20 August, 1781, was murdered by the Tories in the presence of his wife and children. The son was educated at Georgetown, D. C., College, and at Princeton, where he was graduated in 1796. He studied law at Newbern, was admitted to the bar in 1798, and soon attained distinction in his profession. In 1799 he was elected to the state senate from Craven County, and in 1808 to the house of delegates, over which he was chosen to preside. He was a member of congress from 1813 till 1815. His speech in opposition to the loan bill, which proposed to place $25,000,000 at the president's disposal for the conquest of Canada during the war with Great Britain, was a model of eloquence and was widely read and greatly admired. He was judge of the Supreme Court of North Carolina" from 1834 till his death, and some of the best statutes of that state, as well as its judicial organization, are his work. In 1835 he assisted the convention in amending the state constitution, and suggested and elaborated nearly all the reforms in it. He spoke and voted against the proposition to deprive free colored men of the franchise. He was offered, but declined, the United States senatorship in 1840.

Start your search on William Gaston.