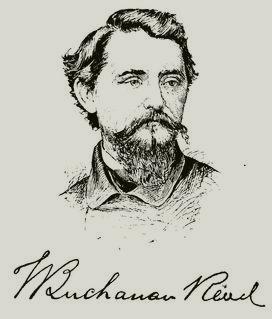 READ, Thomas Buchanan, poet, born in Chester county, Pennsylvania, 12 March, 1822; died in New York city, 11 May, 1872. His mother, a widow, apprenticed him to a tailor, but he ran away, learned in Philadelphia the trade of cigar-making, and in 1837 made his way to Cincinnati, where he found a home with the sculptor, Shobal V. Clevenger. He learned the trade of a sign-painter, and attended school at intervals. Not succeeding in Cincinnati, he went to Dayton, and obtained an engagement in the theatre. Returning to Cincinnati in about a year, he was enabled by the liberality of Nicholas Longworth to open a studio as a portrait-painter. He did not remain long in Cincinnati, but wandered from town to town, painting signs when he could find no sitters, sometimes giving public entertainments, and reverting to cigar-making when other resources failed. In 1841 he removed to New York city, and within a year to Boston. While there he made his first essays as a poet, publishing in the " Courier" several lyric poems in 1843-'4. He settled in Philadelphia in 1846, and visited Europe in 1850. In 1853 he went again to Europe, and devoted himself to the study and practice of art in Florence and Rome till 1858. He afterward spent much time in Philadelphia and Cincinnati, but in the last years of his life made Rome his principal residence. While in tile United States during the civil war he gave public readings for the benefit of tile soldiers, and recited his war-songs in the camps of the National army. He died while making a visit to the United States. His paintings, most of which deal with allegorical and mythological subjects, are full of poetic and graceful fancies, but the technical treatment is careless and unskilful, betraying his lack of early training. The best known are "The Spirit of the Waterfall," "The Lost Pleiad," "The Star of Bethlehem," "Undine," "Longfellow's Children," "Cleopatra and her Barge," and "Sheridan's Ride." He painted portraits of Elizabeth Barrett Browning, the ex-queen of Naples, George M. Dallas, Henry W. Longfellow, and others. His group of Longfellow's daughters was popular in photographs. He turned his hand occasionally to sculpture, producing one work, a bust of Sheridan, that attracted much attention. He possessed a much more thorough mastery of the memos of expression in the art of poetry than in painting. His poems are marked by a fervent spirit of patriotism and by artistic power and fidelity in the description of American scenery and rural life. His first volume of " Poems" (Philadelphia, 1847) was followed by "Lays and Ballads " (1848). He next made a collection of extracts and specimens from the " Female Poets of America" (1848), containing also biographical notices and portraits drawn by himself. An edition of his lyrics, with illustrations by Kenny Meadows, appeared in London in 1852, and in 1853 a new and enlarged edition was published in Philadelphia. A prose romance entitled "The Pilgrims of the Great St. Bernard" was published as a serial. " The New Pastoral," his most ambitious poem, describes in blank verse the pioneer life of a family of emigrants (Philadelphia, 1854). The more dramatic and imaginative poem that followed, entitled "The House by the Sea" (1856), gained for it more readers than had been attracted by its own superior merits. Next appeared "Sylvia, or the Lost Shepherd, and other Poems" (1857), and " A Voyage to Iceland" (1857), and the same year a collection of his "Rural Poems" was issued in London. His "Complete Poetical Works" (Boston, 1860) contained the longer and shorter poems that had been already published. His next narrative poem was" The Wagoner of the Alleghanies," a tale of Revolutionary times (Philadelphia, 1862). During the civil war he wrote many patriotic lyrics, including the stirring poem of " Sheridan's Ride," which was printed in a volume with "A Summer Story" and other pieces, chiefly of the war (Philadelphia, 1865). His last long poem was "The Good Samaritans" (Cincinnati, 1867). The fullest editions of his "Poetical Works" were printed in Philadelphia (3 vols., 1865 and 1867).