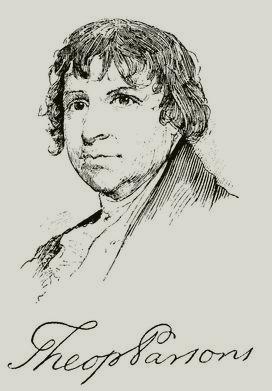 PARSONS, Theophilus, jurist, born in Byfield, Essex County, Massachusetts, 24 February, 1750" died in Boston, Massachusetts, 30 October, 1813. His father, Moses, was a Congregational clergyman and pastor of the church in By-field for more than forty years. Theophilus was graduated at Harvard in 1769, and admitted to the bar of Falmouth, Massassachusetts (now Portland, Maine), in 1774, but his career was interrupted by the almost total destruction of that town by the British the next year, and he returned to Byfieid, where he received the assistance and instruction of Judge Edmund Trowbridge, and laid the foundation of his vast legal learning. Settling in Newburyport, Massachusetts, he acquired a lucrative practice, which gradually embraced all the New England states. He possessed much influence as a Federalist leader and filled a number of important public posts. In 1778 he formed one of the " Essex Junto," a body of citizens of Essex county who opposed the adoption of the state constitution that had been previously framed by the Massachusetts legislature. He was the author of the pamphlet called the "Essex Result," which contributed largely to the rejection of the constitution. This was re-published in the memoir of the author by his son. He was a delegate the next year to the body that framed the constitution that was finally adopted, and in 1788 to the convention to ratify the constitution of the United States, which he actively supported, he was the author of the proposition that was offered by John Hancock, ratifying the instrument and recommending certain amendments known as the " Conciliatory resolutions." He subsequently was occasionally in the state legislature, but took no active part in public affairs, although he remained a consistent Federalist. He removed to Boston in 1800, and from 1806 until his death was chief justice of the supreme court of the state. Judge Parsons was a classical scholar and a mathematician of ability, His legal decisions threw much light on the laws of pleading, marine insurance, and real property, and he rendered substantial service to the community by discountenancing delays and expediting the trial of causes. He possessed a remarkable memory, and was no less famous for his wit than for his attainments. Chief-Justice Lemuel Shaw said of him: " No person was probably more versed in the early history, laws, institutions, manners, and local usages of the settlers of New England, and the public are deeply indebted to him for much that has been preserved on these subjects in the reports of his judicial decisions." See a memoir of him by his son (Boston, 1859). A collection of his opinions was published under the title of "Commentaries on the Laws of the United States" (New York, 1836).--His son, Theophilus, author, born in Newburyport, Mass., 17 Nay, 1797: died in Cambridge, Massachusetts, 26 January, 1882, was graduated at Harvard in 1815, studied law, and after a tour abroad settled first in Taunton and afterward in Boston. For several years he engaged in literary pursuits, and founded and edited the "United States Free Press." From 1847 until his death he was Dane professor of law in Harvard, and he received the degree of LB. D. from that institution in 1849. He was an early convert to the New Jerusalem church, and wrote much in defence and exposition of its doctrines. He published the memoir of his father already mentioned (Boston, 1859), and several works on Swedenborgianism, including three volumes of "Essays" (1845); "Deus tiered" (1867) ; " The Infinite and the Finite" (1872); and " Outlines of the Religion and Philosophy of Swedenborg " (1875). But it is as a legal writer that he is best known, and his publications on that subject include " The Law of Conscience" (2 vols., 1853 ; 5th ed., 3 vols., 1864); "Elements of Mercantile Law" (1856); "Laws of Business for Business Men" (1857); an elaborate and comprehensive treatise on " Maritime Law," including the law of shipping, the law of marine insurance, and the law and practice of admiralty (2 vols., 1859): "Notes and Bills of Exchange " (2 vols., 1862) ; " Shipping and Admiralty" (2 vols., 1869); and "The Political, Personal, ;rod Property Rights of a Citizen of the United States" (1875).

Start your search on Theophilus Parsons.