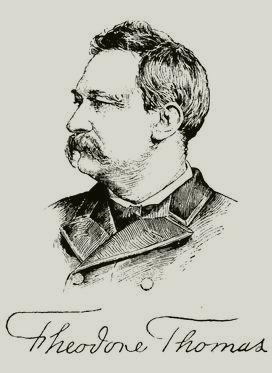 THOMAS, Theodore, musician, born in Esens, Hanover, Germany, 11 October, 1835. He received his musical education principally from his father, who was a violinist of ability, and at the age of six years he played the violin in public concerts. In 1845 he came to this country with his parents, and for two years played violin solos at concerts in New York city. Subsequently he joined the orchestra of an Italian opera company, and visited most of the large cities of the country He then became first violin in the orchestra that accompanied Jenny Lind in 1850, Henrietta Sontag in 1852, and Guilietta Grisi and Giuseppi Mario in 1854, and finally became conductor of both German and Italian operas. Mr. Thomas also led the orchestras that accompanied La Grange, Piccolomini, and Thalberg through the country. Meanwhile, in 1855, with himself as first violin, Joseph Mosenthal, second violin, George Matzka, viola, Carl Bergmann, violoncello, and William Mason as pianist, he began a series of chamber music soirdes which were given at Dodworth's academy, and continued for several years. After 1861 he devoted himself to the organization of his own orchestra, and began at Irving hall in 1864 a series of symphony concerts that came to be regarded as among the musical institutions of New York city, and were continued until 1878. In 1866 he began his summer-night concerts in Terrace garden, which were continued at the Central park garden In order to keep his orchestra together, he travelled with it during the winter season. At these concerts he introduced Wagner's music to the American people, and to him, more than to any one else in this country, is due the present appreciation of the modern school of German music. In 1872 he was the leading spirit in founding the New York Wagner union, which was established for the purpose of aiding in the festival performance of the "Nibelungen Ring" at Baireuth in 1875, and he organized the chorus society which gave the Wagner memorial concert after the death of the composer Mr. Thomas accepted in 1878 the directorship of the newly established College of music in Cincinnati, Ohio, but he resigned that post in 1881. He joined the Philharmonic society in 1853, but in 1858 resigned his membership. Soon after the death of Carl Bergmann in 1876 he was chosen conductor of the society, which office he has since held, except during his absence in Cincinnati Under his leadership the Philharmonic has had an unbroken record of prosperity and has steadily progressed in furnishing a higher class of music to its pctrons. The Brooklyn Philharmonic society has also been under his direction almost continuously since 1862. Mr. Thomas has conducted all of the Cincinnati :May festivals since Chicago in 1882, and the great festival of New York that was held in the 7th regiment armory in 1882. He was conductor of the American opera company in 1885-'7, and in the same years organized a series of popular concerts in New York city, which are still continued. During the summer of 1888 he gave a series of concerts in Chicago, at the close of which he disbanded his orchestra, saying that, as New York city failed to provide a suitable hall, a permanent orchestra was impossible.

Start your search on Theodore Thomas.