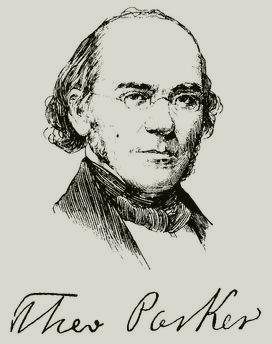 Theodore Parker's system was simple. It was, so far as it was worked out, theism based on transcendental principles. The belief in God and the belief in the immortality of the soul were cardinal with him" all else in the domain of speculative theology he was ready to let go. He followed criticism up to this line ; there he stood stoutly for the defence. He was a deeply religious man, but he was not a Christian believer. He regarded himself as a teacher of new ideas, and said that the faith of the next thousand years would be essentially like his. It is sometimes said that Parker was simply a deist; but they who say this must take into account the strong sweep of his personal aspiration, the weight of his convictions, his devotion to humanity, the enormous volume of his feelings. There is no deist whom he even remotely resembled. Lord Herbert of Cherbury, Shaftesbury, Bolingbroke, Hobbes, Hume, suggest oppositions only. Parker affirmed and denied merely in order to make his affirmation more clear. He was a great believer, less a thinker than a doer. His bulky resources were so much fuel to his flame. His sympathies were all modern; he looked constantly forward, and was prevented only by his plain, common sense from accepting every scheme of his generation that wore a hopeful aspect. But he saw the weak points in reforms that he himself aided. He criticised women while working for their elevation, and laughed at negroes while toiling against their bondage. He was not aesthetic, and had no taste in painting, sculpture, music, poetry, or the delicacies of literature. He knew about them as he knew about everything, but his power was moral and religious, and it was inseparable from his temperament, which was human and practical on the side of social experiment, he bequeathed his library of 13,000 volumes to the Boston public library. He was a prolific author, publishing books, pamphlets, sermons, essays without number, but never with a literary, always with a philanthropic, intention. His publications include "Miscellaneous Writings" (Boston, 1843) ; "Sermons on Theism, Atheism, and Popular Theology" (1852); "Occasional Sermons and Speeches" (2 vols., 1852) ; "Additional Speeches and Addresses" (2 vols., 1855); "Trial of Theodore Parker for the Misdemeanor of a Speech in Faneuil Hall against Kidnapping," a defence that he had prepared to deliver in case he should be tried for his part in the Anthony Burns case (1855); and "Experience as a Minister." His " Discourse on Matters pertaining to Religion" (1842) still presents the best example of his theological method; his "Ten Sermons of Religion" (1853) the host summary of results. His complete works were edited by Frances Power Cobbe (12 vols., London, 1863-'5); (10 vols., Boston, 1870). A volume of " Prayers" was issued in 1862, and one entitled "Historic Americans" in 1870. It included discourses on Franklin, Washington, Adams, and Jefferson. "Lessons from the World of Matter and the World of Mind," selected from notes of his unpublished sermons, by Rufus Leighton, was edited by Frances P. Cobbe (London, 1865). See also "Theodore Parker sa vie et ses oeuvres," by Albert Reville (Paris, 1865). On the death of Mrs. Parker in 1880, Franklin B. Sanborn was made literary executor, and he, it is said, intends to issue some new material. Mr. Parker's life has been presented several times; most comprehensively by John Weiss (2 vols., New York, 1864), and by Octavius B. Frothingham (Boston, 1874). Studies of him have been made in French and English. There is a fragment of autobiography and innumerable references to him as the founder of a new school in theology. There are busts of Parker by William W. Story and Robert Hart.

Start your search on Theodore Parker.