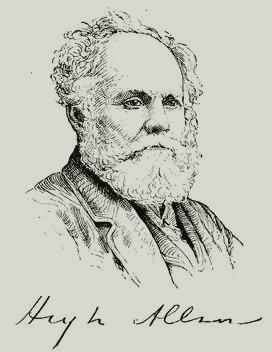 ALLAN, Sir Hugh, ship-owner, born in Saltcoats, Ayrshire, Scotland, 29 September 1810 ; died in Edinburgh, 8 December 1882. After receiving a limited education, he entered a counting-house in Greenock in 1823, and in 1824 sailed on his father's ship, " Favorite," for Canada. For three years he was clerk in a dry-goods store in Montreal, and afterward was in the shipping-house of James Miller. He served during the rebellion of 1837 as a volunteer, rising finally to the rank of captain. Mr. Miller died in 1838. and was succeeded in business by the firm of Edmonston and Allan. In 1853 this firm began the construction of iron screw steamships, and the "Canadian." their first vessel, made her first voyage in 1855. During the Crimean war two of the company's steamers were employed as transport ships, between Portsmouth and Marseilles and the Levant, by Great Britain and France and in 1874 two were employed in a similar service between England and the western coast of Africa. The Allan line of royal mail steamships has contributed greatly to the prosperity of Montreal and of Canadian commerce. Sir Hugh was a director of the Montreal telegraph company, the Montreal warehousing company, the merchants' bank of Canada, the Mulgrave gold mining company, and for a short time of the Pacific railway. His name gained a place in the political history of Canada through his alleged questionable connection with the "Pacific Scandal." He was knighted in 1871, as Sir Hugh Allan of Ravenscraig, in recognition of his hospitality to the prince of Wales, and his services to Canadian and British commerce. He had a beautiful residence at Ravenscraig, Montreal, and a villa at Belmere, on Bake Memphremagog.