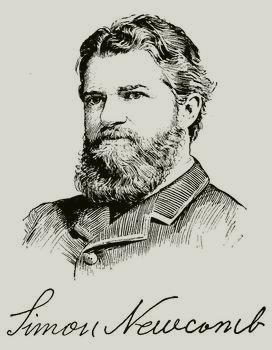 NEWCOMB, Simon, astronomer, born in Wallace, Nova Scotia, 12 March, 1835. He is the son of a teacher of American descent, whose ancestors had settled in Canada in 1761, and who came to the United States in 1852. Simon was the eldest son, and, after being educated by his father, taught for some time. He came to the United States in 1853, and during 1854-'6 was engaged as a teacher in Maryland. There he became acquainted with Joseph Henry and Julius E. Hilgard, who, recognizing his aptitude for mathematics, secured his appointment in 1857 as computer on the "Nautical Almanac," which was then published in Cambridge, Massachusetts He entered the Lawrence scientific school, and was graduated in 1858, continuing thereafter for three years as a graduate student. In 1861 he was appointed professor of mathematics in the United States navy, and assigned to duty at the United States naval observatory in Washington. There he negotiated the contract for the 26-inch equatorial telescope authorized by congress, supervised its construction, and planned the tower and dome in which it is mounted. In 1871 he was appointed secretary of the commission that was created by congress for the purposes of observing the transit of Venus on 9 December, 1874, which organized the expeditions that were sent out by the United States government. He visited the Saskatchewan region in 1860 to observe an eclipse of the sun, and in 1870-'1 was sent to Gibraltar for a similar purpose, and in 1882 he observed the transit of Venus at the Cape of Good Hope. Meanwhile in 1877 he became senior professor of mathematics in the United States navy, with the relative rank of captain, and since that time has been in charge of the office of the "American Ephemeris and Nautical Almanac." A large corps of civilian assistants in Washington and elsewhere, as well as officers of the navy who are detailed to that office, work under his direction. In addition to these duties, in 1884 he became professor of mathematics and astronomy in Johns Hopkins, where he has charge of the graduate students in astronomy. Professor Newcomb has been intimately associated with the equipment of the Lick observatory of California, and examined the glass of the great telescope and its mounting before its acceptance by the trustees. The results of his scientific work have been given to the world in more than 100 papers and memoirs. Concerning these, Arthur Cayley, president of the Royal astronomical society of Great Britain, said:" Professor Newcomb's writings exhibit, all of them, a combination, on the one hand, of mathematical skill and power, and on the other of good hard work, devoted to the furtherance of astronomical science." His work has been principally in the mathematical astronomy of the solar system, particularly Neptune, Uranus, and the moon, but the whole plan in the most exact possible tables of the motions of all the planets. Among the most important of his papers are "On the Secular Variations and Mutual Relations of the Orbits of the Asteroids" (1860); "An Investigation of the Orbit of Neptune, with General Tables of its Motion" (1867); "An Investigation of the Orbit of Uranus, with General Table of its Motion" (1874); " Researches on the Motion of the Moon" (1876) ; "Measure of the Velocity of Light" (1884); and "Development of the Perturbative Function and its Derivative in Sines and Cosines of the Eccentric Anomaly, :rod in Powers of the Eccentricities and Inclinations" (1884). In 1874 Columbian university of Washington conferred on him the degree of LL. D., and in 1875 he received a similar honor from Yale, also from Harvard in 1884, and from Columbia in 1887, while on the 300th anniversary of the founding of the University of Leyden, in 1875, that institution gave him the degree of master of mathematics and doctor of natural philosophy, and on the 500th anniversary of the University of Heidelberg, in 1886, he received the degree of Ph. D. He was awarded the gold medal of the Royal astronomical society in 1874, and in 1878 received the great gold Huygens medal of the University of Leyden, which is given to astronomers once in twenty years for the most important work accomplished in that science between its awards, in 1887 the Russian government ordered the portrait of Professor Newcomb to be painted for the collection of famous astronomers at the Russian observatory at Pulkowa. He was elected an associate of the Royal astronomical society in 1872, corresponding member of the Institute of France in 1874, and foreign member of the Royal society in 1877, and he also holds honorary or corresponding relations to nearly all the European academies of science. In 1887 he was elected one of the eight members of the council of the Astronomische Gesellschaft, an international astronomical society that meets once in two years. He was elected to the National academy of sciences in 1869, and since 1883 has been its vice-president. In 1876 he was elected president of the American association for the advancement of science, and he delivered his retiring address at the St. Louis meeting in 1878. He has also held the presidency of the American society for psychical research. His literary work includes contributions to many of the important reviews. He is also editor of the "American Journal of Mathematics." His scientific books in-elude "Popular Astronomy" (New York, 1877), which has been republished in England and translated into German; " School Astronomy," with Edward S. Holden (1879 ; "Briefer Course," 1883) ; also a series of text-books, comprising "Algebra" (1881) : "Geometry" (1881) ; "Trigonometry Logarithms" (1882); " School Algebra " (1882) ; " Analytic Geometry" (1884) ; " Essentials of Trigonometry" (1884) ; and "Calculus" (1887). Professor Newcomb refers to astronomy as his profession and to political economy as his recreation. In the latter branch his books include "A Critical Examination of our Financial Policy during the Rebellion" (New York, 1865) ; "The A B C of Finance" (1877) ; "A Plain Man's Talk on the Labor Question " (1886); and " Principles of Political Economy" (1886).

Start your search on Simon Newcomb.