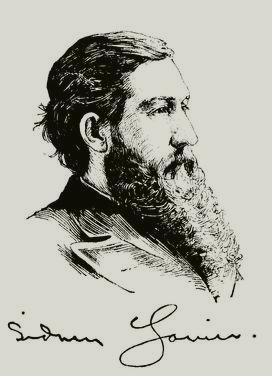 LANIER, Sidney, poet, born in Macon, Georgia, 3 February, 1842; died in Lynn, North Carolina, 7 September, 1881. When a child he learned to play many instruments almost without instruction, devoting himself especially to the flute. He was graduated at Oglethorpe college, Midway, Georgia, in 18(;0. He enlisted in the Confederate army in April, 1861, and participated in the seven days' fighting near Richmond. Afterward he was transferred to the signal service, with headquarters at Petersburg. In 1863 his detachment served in Virginia and North Carolina, and afterward, while in command of a blockade-runner, he was captured, and for five months imprisoned in Point Lookout, Florida. His experience is pictured in a novel that he wrote in three weeks entitled "Tiger-Lilies" (New York, 18(;7). He was a clerk in Montgomery, Alabama, in 1865-'7, afterward principal of an academy in Prattville, Alabama, and in 1868-'72 practised law with his father, Robert S. Lanier, in Macon. At the suggestion of his friend Bayard Taylor he was chosen to write the words of the cantata for the opening of the Centennial exhibition in Philadelphia in 1876. In October, 1877, he settled in Baltimore and delivered lectures on English literature. In 1879 he was appointed lecturer on this subject at Johns Hopkins university. in December, 1880, he wrote his poem "Sunrise," one of a projected series entitled "Hymns of the Marshes." In the following summer he encamped in the mountains of North Carolina, where he died of consumption. His scholarship was wide and accurate, and his investigations in the scientific construction of verse are formulated in his "Science of English Verse" (New York, 1880). His other works are "Florida" Its Scenery, Climate, and History" (Philadelphia, 1876)" " Poems" (1877); "The Boy's Froissart" (New York, 1878)" "The Boy's King Arthur" (1880)" "The Boy's Mabinogion" (1881)' "The Boy's Percy" (1882)" and "The English Novel and the Principles of its Development" (1883). A collection of his poems, with a memorial by William Hayes Ward, was edited by his wife, Mary Day Lanier (1884).--His brother, Clifford Anderson, author, born in Oritfm, Georgia, was educated at Oglethorpe college, but his studies were interrupted by the civil war. He served in the Confederate army, and was afterward signal officer on the streamer "Talisman," running the blockade between Wilmington, North Carolina, and Bermuda until the vessel was wrecked in December, 1864. In 1885-'(; Mr. Lanier was superintendent of the city schools, Montgomery, Alabama he is the author of occasional poems and essays and of a novel entitled "Thorn-Fruit" (New York, 1867).

Start your search on Sidney Lanier.