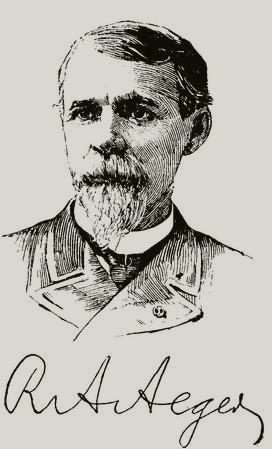 ALGER, Russell Alexander, governor of Michigan, born in Lafayette, Medina County, Ohio, 27 February 1836. He was left an orphan at eleven years of age, worked on a farm till he was eighteen, attending school in the winters, and then, after teaching, studied law and was admitted to the bar in 1859. He began to practice in Cleveland, but was forced by impaired health to remove to Grand Rapids, Mich., where he engaged in the lumber business. He became .captain in the 2d Michigan cavalry at the beginning of the civil war, grid at Boonesville, Mississippi, 1 July 1862, was sent by Philip H. Sheridan, then colonel of that regiment, to attack the enemy's rear with ninety picked men. The Confederates were routed, but Captain Alger was wounded and taken prisoner. He escaped on the same day, and on 16 October was made Lieutenant-Colonel of the 6th Michigan cavalry. On 28 February 1863, he became colonel of the 5th Michigan cavalry, and on 28 June his command was the first to enter the town of Gettysburg. He was specially mentioned in General Custer's report of the cavalry operations there, and in the pursuit of the enemy he was severely wounded at Boonesborough, Maryland, on 8 July. He was with Sheridan in the Shenandoah valley in 1864, and on 11 June at Trevillian station, by a brilliant charge, he captured a large force of Confederates. On 11 June 1865, he was given the brevets of Brigadier-General and Major-General of volunteers. He then resumed the lumber business in Detroit, Mich., and has acquired a fortune serving also as president or director of various corporations. His great pine forest on Lake Huron comprises more than 100 square miles and produces annually more than 75,000,000 feet of lumber. In 1884 he was the successful Republican candidate for governor of the state, serving from 1885 till 1887. His benefactions to the poor of the city of Detroit have been noteworthy.