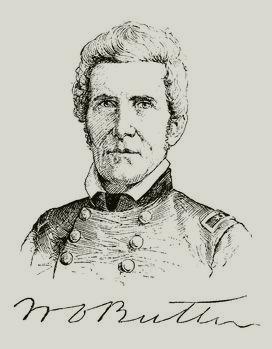 BUTLER, Richard, soldier, born in Ireland; killed at the defeat of St. Clair, 4 November, 1791o He came to America with his parents before 1760, was made lieutenant colonel in the Pennsylvania line at the beginning of the Revolutionary war, in the spring of 1777 was lieutenant colonel of Morgan's rifle corps, and distinguished himself on many occasions. While with Lafayette's detachment near Williamsburg, Virginia, 26 June, 1781, he attacked Col. Simcoe's rangers, gaining the advantage. He held the rank of colonel of the 9th Pennsylvania regiment at the close of the war, was agent for Indian affairs in Ohio in 1787, and in the expedition of St. Clair against the Indians, in 1791, commanded the right wing, with the rank of major general. When attacked early in the morning of 4 November, he repeatedly charged the enemy, received several severe wounds, and finally was tomahawked and scalped. --His brother, William, was lieutenant colonel of the 4th Pennsylvania regiment in the Revolutionary army. In October, 1778, after the destruction of Wyoming by John Butler and the Indians, he conducted an expedition from Schoharie, which destroyed the Indian settlements of Unadilla and Anaguaga. His account of the expedition was published.--Thomas, soldier, third of the Butler brothers, born in Pennsylvania in 1754 ; died in New Orleans, Louisiana, 7 September, 1805. In 1776, while studying law with Judge Wilson, of Philadelphia, he joined the army, soon obtained a company, and was in almost every action in the middle states during the revolution. At Brandywine, 11 September, 1777, he received the thanks of Washington on the field for intrepidity in rallying a retreating detachment. At Monmouth Wayne thanked him for defending a defile in the face of a heavy fire while Col. Richard Butler's regiment withdrew. After the war he retired to a farm, but in 1791 was made major, and commanded a battalion from Carlisle in Gibson's regiment, under St. Clair, at whose defeat, 4 November, he was twice wounded.

His elder brother, Richard Butler, was killed, and he was with difficulty removed, his leg having been broken by a ball, by his surviving brother, Edward. He became major of the 4th sub-legion on 11 April, 1792, lieutenant colonel commanding the 4th infantry on 1 July, 1792, and, on the reorganization of the army on a peace basis in June, 1802, was retained as colonel of the 2d infantry, to which he was appointed on 1 April, 1802,. In 1797 he was ordered by President Washington to expel settlers from Indian lands in Tennessee, and made several treaties with the Indians while in that country.

His son, ROBERT BUTLER, served in the army as assistant adjutant-general to General Harrison in the battle of the Thames, distinguished himself at New Orleans, resigned his colonelcy in 1821, and from 1824 till 1849 was surveyor of public lands in Florida.-Percival, fourth of the brothers, soldier, born in Pennsylvania in 1760; died in Port William, Kentucky, 11 September, 1821. He was a captain in the revolutionary army, was with Morgan at Saratoga, commanded in the conflict with Col. Simcoe at Spencer's Ordinary, 25 June, 1781, and served at the siege of Yorktown. After the war he removed to Jessamine County, Kentucky, and was adjutant-general in the war of 1812. His son, THOMAS LANGFORD, soldier, born in Lexington, Kentucky, in 1789; died in Louisville, Kentucky, 21 October, 1880. In 1796 he removed to Carrollton, then Port William, Kentucky, and in 1809 entered the army as lieutenant. In 1813 he was promoted captain, and served through the northwestern campaign under Harrison. In 1814, as aide-de-camp to General Jackson, he was at the siege of Pensacola, and in 1815 at the battle of New Orleans, and was brevetted major for gallantry. After the war he received the appointment of surveyor and inspector of the port of New Orleans. He resigned his post and returned to his home in Kentucky. In 1826 he represented Gallatin County in the legislature. He was a member of the old court party, and aided in its success on the question that then agitated the state. In 1847 he again represented Carroll and Gallatin in the legislature. Another son,

William Orlando Butler, soldier, born in Jessamine County, Kentucky, in 1791; died in Carrollton, Kentucky, 6 August, 1880. He was graduated at Transylvania University in 1812, and was studying law under Robert Wickliffe at Lexington, when, at the breaking out of hostilities with England, he enlisted as a private, and hastened to the relief of Fort Wayne. Promoted ensign in the 17th infantry, he was at the disastrous battles of 18 and 22 January, 1813, at Raisin river. He distinguished himself in the second engagement by burning a barn from which the Indians poured a galling fire into the American ranks, was afterward wounded and taken prisoner, and, after enduring privations and inhuman treatment, was paroled at Fort Niagara, and made his way back to Kentucky amid many hardships. Commissioned a captain, he raised a company, and did good service at Pensacola. He was ordered to New Orleans, where, on the night of 23 December. 1814, while in command of four companies on the left; wing, he attacked and repelled General Sir Edward Pakenham. This check gave time for the construction of defenses at Chalmette, which on 8 January enabled the Americans to defeat a force double their own and win a decisive victory. For this service he was made brevet major.

In the following year he succeeded his brother, Maj. Thomas Butler, as aide-de-camp to General Jackson. In 1817 he resigned from the army and resumed the practice of law, was elected in that year to the legislature, and served through three terms. In 1839 he was elected as a democrat to congress, and he was again returned in 1841, but declined a third nomination. He was induced to accept the nomination for governor in 1844, with no hope of election, but with the effect of reducing the majorities of the Whig party from 28,000 to fewer than 5,000. His success at the bar was marked, but at the beginning of the Mexican war he joined the army, and on 29 June, 1846, was appointed major- general of volunteers. He reported to General Taylor, and in the early military movements in Texas and northern Mexico bore a prominent part. At the seige of Monterey, 24 September, he charged a battery, was wounded in the leg, and was sent home, but rejoined the army of General Scott the following year, and was at the capture of the City of Mexico. For his bravery at Monterey he received a sword of honor from congress, and one from his own state. In February, 1848, being senior major general, he succeeded General Scott in the chief command, and held that place when peace was signed, 29 May, 1848. In May, 1848, the national democratic convention at Baltimore nominated General Butler for vice-president on the ticket on which Lewis Cass held the first place. This ticket was defeated by the schism in the party, and the nomination in New York of the free-soil candidates, Van Buren and Adams. General Butler remained in private life after this election, refusing the appointment of governor of the territory of Nebraska in 1855. His last appearance on the public stage was as a member of the peace congress which met at Washington in 1861. He was the author of "The Boatman's Horn" and other short poems. His "Life and Public Services," edited by Francis P. Blair, Jr., appeared in 1848.-Edward, the youngest of the five brothers, died at Fort Wilkinson, Georgia, 6 May, 1803, was a captain in Gibson's regiment of Pennsylvania levies of 1791, adjutant-general to General Wayne in 1796, and was retained with the rank of major on the establishment in 1802. His son, EDWARD G. W., entered the army as a cadet in 1816, rose to be 1st lieutenant, resigned in 1831, re-entered the army from Louisiana in 1847 as colonel of dragoons, and served in the Mexican war.

Start your search on Richard Butler.