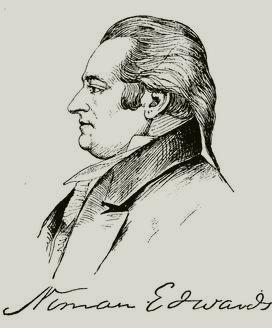 EDWARDS, Ninian, senator, born in Montgomery County, Maryland, in March 1775; died in Belleville, Illinois, 20 July 1833. His education was at one time directed by William Wirt, and was completed at Dickinson College, Pennsylvania At the age of twenty he removed to the Green River district in Kentucky. He studied both medicine and law, but, deciding in favor of the latter, was admitted to the bar in 1798 in Kentucky, and in 1799 in Tennessee. He had previously been elected to the Kentucky legislature before he was twenty-one. He rose rapidly in his profession, and was appointed first clerk, and then judge, of the general court of Kentucky, judge of the circuit court in 1803, of the court of appeals in 1806, and in 1808 chief justice of the state, before he had attained his thirty-second year. In 1809 President Madison appointed him governor of Illinois, on the organization of that territory, and he retained the office till its admission to the Union in 1818. Before congress had adopted any measures on the subject of volunteer rangers, he organized companies, supplied them with arms, built stockade forts, and established a line of posts from the mourn or the Missouri to the Wabash river. He was thus prepared for defense, and during the war of 1812 and the frontier wars with the Indians, his precautionary measures were greatly appreciated.

In 1816 he was appointed one of three commissioners to treat with the Indian tribes. He was one of the first two United States senators from Illinois, having been elected as a Democrat, and serving from 4 December 1818, till 4 March 1824, when he resigned, to accept the appointment of minister to Mexico. He had reached New Orleans on his way to his post, when he was recalled, in consequence of charges made against hint by William H. Crawford, then secretary of the treasury. He was again elected governor of Illinois and served from 1826 to 1830. See "History of Illinois and Life of Ninian Edwards," by Ninian W. Edwards (1870); and" The Edwards Papers," being vol.iii, of theChicago historical society's collections (Chicago, 1884).

His son, Ninian Wirt Edwards, lawyer, born in Frankfort, Kentucky, 15 April 1809, was taken by his father, when an infant, to Kaskaskia, then the capital of Illinois territory. He was graduated at the Transylvania University, and at its law department in 1833. Before his graduation he was married to Elizabeth P. Todd, a sister of Mrs. Abraham Lincoln. Mr. Edwards began the practice of law in 1833, and in 1834 was appointed attorney general of Illinois, but resigned in 1835, and removed to Springfield. In 1836 he was elected to the legislature, and with Abraham Lincoln and others was active in securing the removal of the capital to Springfield. Mr. Edwards remained a member of the legislature continuously till 1852. During that period he was also a member of the convention that framed the State constitution in 1848.

In 1854 he was appointed by the governor attorney before the board of commissioners whose duty it was to investigate the claims of canal contractors against the state, amounting to over $1,500,000. From 1854 till 1857 he served as superintendent of public instruction, and drafted a bill regarding free schools, which afterward became a law. In August 1861, he was appointed by President Lincoln captain commissary of subsistence, which appointment he held until 22 June 1865. In the latter year Mr. Edwards retired almost entirely from the practice of his profession. At the request of the State historical society, he prepared a volume entitled "The Life and Times of Ninian Edwards, and History of Illinois," which is considered an authority (1870).

Another son, Benjamin Stevenson Edwards, lawyer, born in Edwardsville, Madison County, II1., 3 June 1818 : died in Springfield, Illinois, 5 February 1886. was graduated at Yale in 1838, and at the law department in the following year. In politics he was first a Whig, and subsequently a strong Democrat, being several times chosen to the state legislature. In 1869 he was elected circuit judge of Sangammon County, Illinois, but resigned after eighteen months' service, preferring the active practice of his profession. At the time of his death he was president of the state bar association.

Start your search on Ninian Edwards.