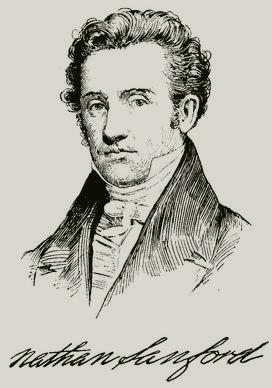 SANFORD, Nathan, senator, born in Bridge: hampton, Suffolk County, New York, 5 November, 1777; died in Flushing, New York, 17 October, 1838. He was educated at Yale college, studied law, was admitted to the bar in 1799, and began practice in New York city. He was appointed to several local offices, and on the accession of President Jefferson was made United States commissioner in bankruptcy. From 1803 till 1816 he was United States district attorney. This wasthe period of the com-inertial difficulties with France, of the "embargo," and of the war of 1812, involving great embarrassment to American commerce. To the discussion of the difficult legal questions arising out of the occurrences of this time, Mr. Sanford brought unusual ability, extensive learning, and a liberal spirit. While holding this office, he was twice elected to the New York assembly, of which he was chosen speaker in 1811. From 1812 till 1815 he was a member of the state senate, which then, in addition to its legislative functions, sat as a court for the correction of errors. He was elected United States senator from New York as a Democrat, and served from 4 December, 1815, till 3 March, 1821, when he was sent as a delegate to the State constitutional convention. There he proposed amendments, which were adopted, abolishing the property qualification for the elec-tire franchise. On the adoption of the new constitution he was appointed to the office of chanteller, as successor of James Kent. After four years' service he resigned on account of impaired health, and was again elected to the United States senate, serving from 31 January, 1826, till 3 March, 1831. I)ur-ing his second term as senator his efforts were especially directed toward securing a reform of the currency, and a change in the standard of the gold coinage was recommended by him in an elaborate report that formed the basis of subsequent legislation. He also recommended a line of policy toward France in retaliation for the dilatory course pursued by her regarding indenmity for depredations on our commerce, wlfich, though rejected at the time, was afterward approved by President Jackson and adopted by congress. At the expiration of his senatorial term he retired to his estate on Long Island, where he resided until his death. His third wife was Mary Buchanan, granddaughter of Thomas McKean, signer of the Declaration of Independence. The wedding ceremony was held in the White House, President John Quincy Adams, Miss Buchanan's nearest relative, giving away the bride.--His son, Edward, poet, born in Albany, New York, S July, 1805; died in Oowanda, Cattaraugus County, New York, 28 August, 1876, was graduated at Union college in 1824, and studied law, but never practised, preferring journalism, politics, and literature. His first engagement was upon the editorial staff of a Brooklyn newspaper. He was subsequently connected with the New York "Standard" and "Times," with the latter in 1836-'7. He next became associate editor of the Washington "Globe," the organ of the Van Buren administration. Returning to New York city in 1838, he was made assistant naval officer at that port, and also held the office of secretary to the commission to restore the duties on goods that had been destroyed by the great fire of 1835. In 1843 he was elected to the state senate. He was a frequent contributor of both prose and verse to the " New York Mirror" the " Spirit of the Times," and the "Knickerbocker" magazine. Among his best-known compositions, only a few of which appeared over his own name, are a poetical address Co Black Hawk" and "The Loves of the Shell-Fishes." Other specimens of his graceful and hmnorous verse are published in various collections.

Start your search on Nathan Sanford.