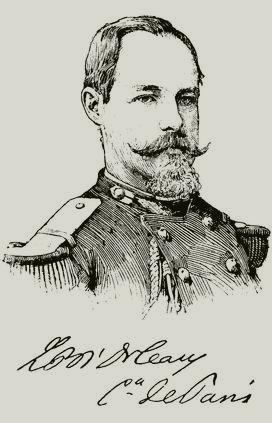 ORLEANS, Louis Philippe d', king of the French, born in Paris, France, 6 October, 1773; died in Claremont, England, 26 AUG., 1850. He was educated by Mine. de Genlis, embraced the doctrines of the French revolution with his father, who exchanged his title of Duke d'Orleans for the name Philippe EgalitS, and performed brilliant services in the revolutionary army. Becoming involved in the schemes of Charles F. Dumouriez, he escaped with that general, and for several months taught mathematics and Geography in a school at Reichenau. Switzerland. After his father was beheaded he travelled under an assumed name in northern Europe, and on 24 September, 1796, took passage as a Danish subject on the ship " America," and landed in Philadelphia on 21 October He was joined by his brothers, the Duke de Montpensier and the Count de Beaujolais, and made a tour through the United States, travelling through the New England states, exploring the great lakes and the valley of the Mississippi, and visiting Washington at Mount Vernon in 1797. They set out for Spain after their mother was released and took up her residence at Madrid, but were detained by the Spanish authorities at Havana, and compelled to sail for the United States. He returned with his brothers to Europe in 1800, attempted to stir up insurrections in Spain, and resided in Twickenham, near London, until he was permitted to return to France in 1817. He was a leader of the revolution of July, 1830, was elected king of the French, and reigned until he was compelled to abdicate in favor of his grandson, the Count of Paris, in consequence of the revolution of February, 1848.--His son, Francois Ferdinand Philippe Louis Marie, Prince de Joinville, born in Neuilly, 14 August, 1818, entered the navy when very young was commissioned as 1st lieutenant (1836) to the Mediterranean squadron under Admiral Hugon, and landed (1837)at Bona to join his brother, .the Duke of Nemours, in his attack on Constantine, but arrived after the city had already fallen, ***t18 was intrusted with the mission of obtaining reparation from the government of Mexico, and assisted, as commander on board the frigate " La Creole," at the bombardment of San Juan de Ulua (27 November, 1838), and a few days afterward, at the head of a landing force of sailors, he forced the gates of Vera Cruz, and, despite a galling fire, took with his own hand the Mexican general Arista. For his brilliant conduct on this occassion he was rewarded with the cross of the Legion of honor and the rank of full captain. In 1840 he received the command of the ships commissioned to transport the remains of Napoleon I. from St. Helena to France. In 1843 he married in Brazil the Princess Francesca da ***Bragan(;a, sister of the Emperor Pedro II., and was appointed (1844) rear-admiral and a member of the council of admiralty. He commanded in 1845 the French fleet operating against Morocco, bombarded (6 August) Tangiers, took Mogador (15 August), and was raised to the rank of vice-admiral. At the outbreak of the revolution (1848) he, together with his brother, the Duke of Nemours, was still serving in Algiers, but then resigned his command, and retired to England to join his exiled father and family. At the'beGinning of the war of secession he came to the United States (in 1861), and, leaving his son, the Duke of Penthievre, in the naval academy of Annapolis, with his two nephews, the Count of Paris and the Duke of Chartres, joined the staff of General McClellan and took an active part in the Chicka-hominy campaign, returning to England in 1862.