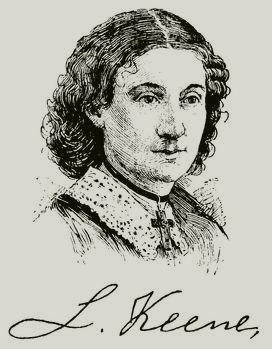 KEENE, Laura, actress, born in England in 1820; died in Montclair, New Jersey, 4 November, 1873. At an early age she developed a taste for the stage, Her first appearances were made in London, at the Lyceum, while that theatre was under the management of Madame Vestris. She was most successful in comedy. In October, 1851, she appeared as Pauline in Bulwer's "Lady of Lyons," and achieved a marked success. She came to the United States in 1852, and on 20 October made her first appearance at Wallack's theatre, New York, performing in her favorite parts and commanding excellent houses. In 1854, after visiting Boston, Philadelphia, and other eastern cities, Miss Keene went to California, and thence to Australia. In a pecuniary sense, as well as otherwise, her visits to the gold regions were quite successful; and when in 1855 she returned to this country, she assumed the management of the Varieties theatre in New York. Soon afterward she established a new theatre, which was known for several years by her own name, but later as the Olympic, and continued its lessee and manager until 1863. In this house she brought out, 18 October, 1858, " Our American Cousin," with Joseph Jefferson as Asa Trenchard and Edward A. Sothern as Lord Dundreary. This piece had an immense run. On 26 November, 1860, she produced "The Seven Sisters," which had a run of 169 nights. Soon afterward Miss Keene married a Mr. Lutz. The Laura Keene company became well known outside of New York, and it was at one of her representations of " Our American Cousin" at Ford's theatre, Washington, 14 April, 1865, that President Lincoln met his death. In 1868 she visited England. On her return she organized a travelling company, of which she retained the management, reappearing in New York in 1870, and occupying the stage until within two years of her death. Her last undertaking was the publication of a weekly art journal in New York city, which was issued for about one year. She constructed several plays, which met with only moderate success.

Start your search on Laura Keene.