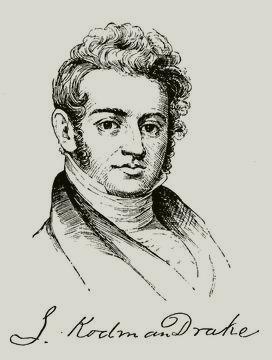 DRAKE, Joseph Rodman, poet, born ill New York City, 7 August 1795; died there, 21 September 1820. He was an only son, one of four children, who, early bereaved of their parents, were subjected to many of the pains and privations incident to poverty and the loss of their natural protectors. Like his sisters Caroline and Louise, he was a poet from childhood. The writer among Halleck's papers found some of his juvenile verses. At fourteen Drake wrote the "MockingBird" and "The Past and Present," a part of which furnished the concluding passage of " Leon in the published volume of his poems. Four years later he abandoned merchandise from a distaste for business, and began the study of medicine with Drs. Bruce and Romayne.

In the winter of 1812'3 Drake and Halleck met and immediately became friends. When the young and handsome physician was married in the summer of 1816 to a daughter of Henry Eckford, the opulent shipbuilder, it was Halleck who officiated as groomsman; when he went to Europe with his accomplished wife, it was to his brother poet that he addressed several amusing epistles; when their daughter and only child was born, she was christened Halleck; when the pulsations of his gentle heart were daily growing weaker, it was his faithful friend " Fitz " who with more than a brother's love soothed his (lying pillow; and, when the grave had forever closed over Drake, it was the same sorrow stricken friend who wrote those exquisitely touching lines so familiar to the English-speaking world, and which will ever continue to be among Halleck's and Drake's most enduring monuments. " The Culprit Fay," on which Drake's reputation as a poet chiefly rests, was written in his twenty-second year, and not, as it has always been said, in the summer of 1819. A manuscript copy now before the writer states that it was composed in August 1816.

In March 1819, the literary partners began contributing anonymously to the "Evening Post" a series of good-natured verses known as "The Croakers," which appeared almost daily during three months and occasionally afterward. These humorous poems were in 1860 colleered and issued in a handsome octavo by the Bradford club of New York, and in 1868 they were included, with several unpublished "Croakers," in an edition of Halleck's poems. In place of the original signatures of Croaker, Croaker Junior, and Croaker & Co., the editor of the volume made known for the first time the respective author of each poem, indicating also by the letters D. and H. the joint authorship of the literary partners, or, to quote Halleck's familiar words to his biographer, that "we each had a finger in the pie." Whoever among the present generation wishes to learn something of the leading men of the City and state, and of the social, scientific, and political events of so interesting a decade as that of 1819'29 in New York history, cannot but be enlightened as well as greatly amused by a perusal of these sprightly poems. When Drake was on his deathbed, at his wife's request Dr. DeKay, an intimate friend, collected and copied all his poems, which could be found and took them to him. "See, Joe," he said, "what I have done." "Burn them," was the reply of the dying poet; "they are valueless."

A judicious selection of her father's poems, including "The Culprit Fay" and "The American Flag," was, however, made in October 1835, by the poet's daughter, being the volume issued in New York during the following year, and fitly dedicated to FitzGreene Halleck. Thirty years later an illustrated edition of "The Culprit Fay" was issued in New York, of which many thousands have been sold. The young poet, who was described by his literary partner "as perhaps the handsomest man in New York," left behind him two portraits, one a miniature, from which the accompanying picture is copied, the other an oil painting by Henry Inman. It was for half a century in the possession of Charles P. Clinch, the last survivor among Drake's intimate friends. See Wilson's "Life of Halleck " (New York, 1869), and "Bryant and his Friends" (1886).