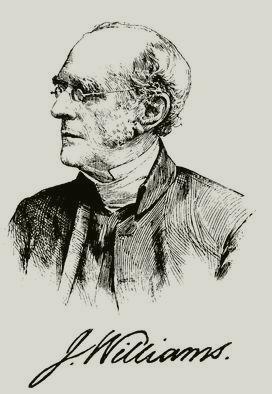 WILLIAMS, John, P. E. bishop, born in Deer-field, Massachusetts, 30 August, 1817. He entered Harvard at the age of fourteen, and after remaining there two years joined the junior class at Washington (now Trinity) college, where he was graduated in 1835. He studied theology with Dr. Samuel F. Jarvis, and was ordained by Bishop Thomas C. Brownell in 1838. From 1837 till 1840 he served as tutor in Washington college, and he then spent a year in travel in England and France. On his return he became assistant minister of Christ church, Middletown. Conn., from which he was called to the rectorship of St. George's church, Schenectady, New York While rector in Schenectady his influence was great in his parish, among the students of Union college, and he was nearly elected provisional bishop of New York on the suspension of Bishop Benjamin T. Onderdonk. In 1848, when he was but thirty-one years old, he was chosen president of Trinity college, and the announcement of his election was received with great enthusiasm, while his inaugural address showed the scholarly principles on which he considered all true education to be based. In connection with the presidency Dr. Williams held the professorship of history and literature. In 1851 Dr. Brownell, bishop of Connecticut, having asked that, on account of his growing infirmities, an assistant bishop might be elected, the diocesan convention chose Dr. Williams, and he was consecrated on 29 October He was able to continue in charge of the college for two years, but in 1853, as his episcopal duties became more numerous and urgent, he felt obliged to retire from the presidency. Under his administration the college had increased in prosperity, its course of instruction had been developed, and its library funds had been increased. Owing to Dr. Williams's profound learning in theology and his gifts as a teacher, several graduates and others studying" for holy orders had been for a few years under his care, and an informal theological department had grown up at the college, In 1854 a charter was obtained for the Berkeley divinity-school, mid it was located at Middletown. In this school Bishop Williams has been from the beginning the dean and the principal instructor in doctrinal theology, in the history of the Reformation, and in the Prayer-Book, mid his lectures at different times have covered the whole range of theological studies. Many of the clergy of the Episcopal church in this country have thus been trained by him.

He has also continued to lecture on history at Trinity college, of which he was made vice-chancellor at the time; of his resignation of the presidency, succeeding to the chancellorship when he became bishop of the diocese on the death of Bishop Brownell in 1885. For many years before that time the whole administration of the diocese had been in Bishop Williams's hands. In 1881 he was appointed the first lecturer at the General theological seminary, New York, on the Bishop Paddock foundation, and in the same year he delivered the first series of Bedell lectures at the seminary and college in Gambler, Ohio. At the general conventions of 1883 and 1886 he was chosen chairman of the house of bishops, and he has constantly served on important committees of the bishops and joint commissions of the convention. In 1884 he visited Scotland for the centenary commemoration of the consecration of the first bishop of Connecticut, and delivered the commemorative sermon in Aberdeen. Bishop Williams is a churchman of the type that was once represented by Dean Hook and Bishops Wilberforce and Wordsworth. Since his ordination he has been a diligent student of ecclesiastical history. He is remarkable for his genial manners to young men, and in an eminent degree exerts a personal influence over his students. His manner in the pulpit is dignified and impressive, and he is one of the most eloquent speakers in the Protestant Episcopal church, of which he is now the presiding bishop. He received the degree of D. D. from Union in 1847, Trinity in 1849, Columbia in 1851, and Yale in 1883, and that of LL. D. from Hobart in 1870. His literary works include many and valuable contributions to the "American Church Quarterly Review," the " Churchman," and other periodicals, a charge on "Everlasting Punishment" (1865), with many occasional sermons and addresses; "Ancient Hymns of Holy Church" (Hartford, 1845); "Thoughts on the Gospel Miracles" (New York, 1848) ; Paddock lectures on "The English Reformation" (1881); Bedell lectures on " The World's Witness to Jesus Christ" (1882)" historical sermons in the "Seabury Centenary" (1885) ; and "Studies in the Book of Acts" (1888). He also edited, with additional notes, an American edition of Bishop Harold Browne's "Exposition of the Thirty-nine Articles" (1864).

Start your search on John Williams.