Start your search on John Hancock.

, the United States of America: We The People.  Click Here

No Taxation Without Representation

US Bill of Rights 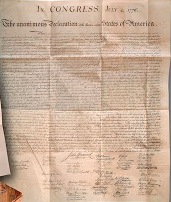