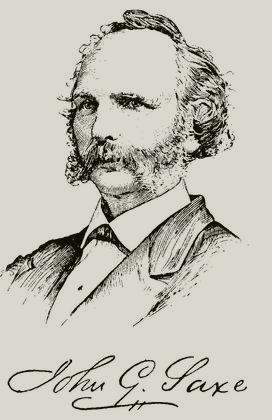 SAXE, John Godfrey, poet, born in Highgate, Vermont, 2 June, 1816; died in Albany, New York, 31 March, 1887. He entered Wesleyan university in 1835, but left in his freshman year, and was graduated at Middlebury in 1839. During the four years following he studied law in Lockport, New York, and then in St. AI-bans, Vermont, where, in 1843, he was admitted to the bar. He practised with success in Franklin county for several years, becoming in 1850-'1 state's attorney for Chittenden county, and in 1847-'8 he was superintendent of common schools, His fondness for literature to journalism, and in 1850 he purchased the 'Burlington Sentinel," which he edited until 1856. Mr. Saxe served as attorney-general of Vermont in 1856, and for a time was deputy collector of customs. In 1859, and again in 1860, he was the unsuccessful Democratic nominee for governor. Settling in New York, he devoted himself to literature and lectured until 1872, when he moved to Albany, and became an editor of the "Evening Journal." In 1866 Middlebury gave him the degree of LL. D. Mr. Saxe achieved his greatest reputation by his poetry. As a young lawyer he sent his earliest verses to the "Knickerbocker," and in after years he contributed to "Harper's Magazine" and the "Atlantic Monthly." His " Rhyme of the Rail," "The Briefless Barrister," "The Proud Miss McBride," and similar humorous poems, as well as his more serious "Jerry, the Miller," "I'm growing Old," "The Old Church-Bell," and "Treasures in Heaven," were very popular. His published works include "Progress: a Satirical Poem" (New York, 1846) ; "Humorous and Satirical Poems" (Boston, 1850); "The Money King, and other Poems" (1859); "The Flying Dutchman, or the Wrath of Herr Von Stoppelnose" (New York, 1862); "Clever Stories of Many Nations rendered in Rhyme" (Boston, 1865); "The Times, the Telegraph, and other Poems" (London, 1865) ; "The Masquerade, and other Poems" (Boston, 1866); "Fables and Legends of Many Countries" (1872) ; and "Leisure-Day Rhymes" (1875). There have also been numerous collections of his poems.