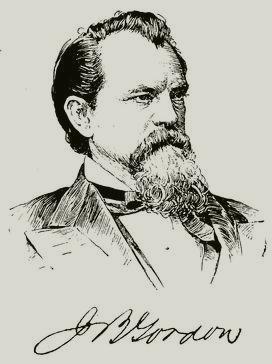 GORDON, John Brown, governor of Georgia, born in Uspon County, Georgia, 6 February, 1832. He was educated at the University of Georgia, studied law and was admitted to the bar, but had practiced only a short time when he entered the Confederate army, as a captain of infantry. He rose successively to the rank of lieutenant-general. He commanded one wing of Lee's army at Appomattox Court-House, and was wounded in battle eight times during the war. He was the Democratic candidate for governor of Georgia in 1868, but, though his election was claimed by his party, his opponent, Rufus B. Bullock, secured the office. He was a member of the National Democratic conventions of 1868 and 1872, presidential elector for the same years, and in January, 1873, was elected to the United States senate. He was reelected in 1879, but resigned his seat in 1880. He took an active part in the proceedings of the senate, and gave a moderate support to the administration of President Hayes. In 1886 he was elected governor of Georgia.