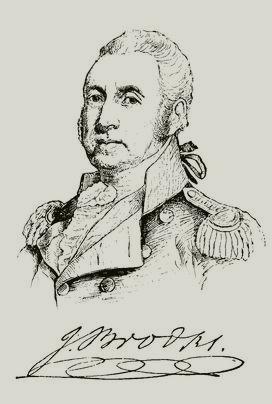 BROOKS, John, governor of Massachusetts, born in Medford, Massachusetts, 31 May, 1752; died 1 March, 1825. His early life was spent on his father's farm, and at the age of fourteen he was apprenticed to Dr. Simon Tufts, under whose tuition he remained seven years. At this time he formed an intimacy with his fellow-student Benjamin Thompson, afterward Count Rumford, and they continued friends through life. After settling at Reading as a physician, he undertook to drill a company of minute-men, was present with them at the battle of Lexington, and received, soon afterward, the commission of major. He assisted in fortifying Breed's Hill on the evening of 16 June, 1775, but was not present at the battle on the 17th, being sent on foot with a dispatch from Col. Prescott to General Ward. In 1777 he was made lieutenant colonel of the 8th Massachusetts regiment, which was chiefly raised by himself, and in the expedition for the relief of Fort Stanwix, in August of that year, suggested a successful stratagem for dispersing the Indians. In the battle of Saratoga he stormed and carried the German intrenchments at the head of his regiment. Becoming colonel in 1778, he was associated with Baron Steuben in the introduction of a system of tactics, and acted as adjutant-general at the battle of Monmouth. During the Newburg conspiracy of 1783 Col. Brooks was a faithful adherent of Washington. After the war he returned to the practice of his profession in Medford, and was for many years major general of militia. In 1788 he was a member of the state convention that ratified the federal constitution. Washington appointed him marshal of the district and inspector of the revenue in 1795, and frown 1812 till 1815 he was adjutant-general of the state. He was elected governor in 1816, and re-elected seven years in succession, finally declining to be again a candidate. In 1816 Harvard gave him the degrees of LL. D., and M.D. He bequeathed his library to the State medical society, of which he was president from 1817 till his death. Governor Brooks published an oration delivered before the Society of the Cincinnati (1787), a discourse before the humane society (1795), a eulogy on Washington (1800), and a discourse on pneumonia (1808).

Start your search on John Brooks.