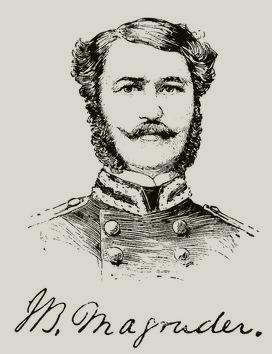 MAGRUDER, John Bankhead, soldier, born in Winchester, Virginia, 15 August, 1810; died in Houston, Texas, 19 February, 1871. He was graduated at the United States military academy in 1830, assigned to the artillery, and served in the west, in Maine, and at Fort McHenry, Baltimore. In the Mexican war he commanded the light battery of General Pillow's division, and was brevetted major for gallantry at Cerro Gordo, and lieutenant-colonel for Chapultepec, where he was severely wounded. After the war he served in Maryland, California, and Newport, Rhode Island, where he was in command of Fort Adams. While holding this last post he added greatly to the gayety of Newport by the splendid entertainments that he gave at the fort during the fashionable season. When Virginia seceded, he resigned his commission, that of captain of artillery, and entered the Confederate army. After gaining the battle of Big Bethel, he was made brigadier-general and placed in command of the Confederate forces on the peninsula, with his headquarters at Yorktown, where for several weeks he opposed the advance of the national army. He was then promoted major-general and took part in the seven days' fighting around Richmond, especially in the battle of Malvern Hill. On 16 October, 1862, he was placed in command of the Department of Texas, and on 1 January, 1863, he recovered Galveston from the National forces, capturing the steamer "Harriet Lane," and dispersing for a time the blockading squadron. He remained in command in Texas until the close of the war, when he entered the army of Maximilian in Mexico, with the rank of major-general, serving until the emperor's downfall and execution. He then returned to the United States and lectured, in Baltimore and other cities, on Mexico. In 1869 he settled in Houston, where he remained until his death.--His niece, Julia, author, born in Charlottesville, Virginia, 14 September, 1854, has published "Across the Chasm," anonymous (New York, 1885); "At Anchor" (Philadelphia, 1887); and "A Magnificent Plebeian" (New York, 1887).