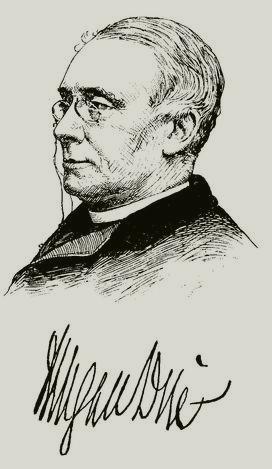 DIX, John Adams, born in Boscawen, New Hampshire, 24 July 1798; died in New York City, 21 April 1879. His early education was received at Salisbury, Phillips Exeter academy, and the College of Montreal. In December 1812, he was appointed cadet, and going to Baltimore aided his father, Major Timothy Dix of the 14th U. S. infantry, and also studied at, St. Mary's College. He was made ensign in 1813, and accompanied his regiment, taking part in the operations on the Canadian frontier. Subsequently he served in the 21st infantry at Fort Constitution, New Hampshire, where he became 2nd lieutenant in March 1814, was adjutant to Colonel John De B. Walback, and in August was transferred to the 3d artillery. In 1819 he was appointed aide-de-camp to General Jacob Brown, then in command of the Northern military department, and stationed at Brownsville, where he studied law, and later, under the guidance of William West, was admitted to the bar in Washington. He was in 1826 sent as special messenger to the court of Denmark. On his return he was stationed at Fort Monroe, but continued illhealth led him to resign his commission in the army, 29 July 1828, after having attained the rank of captain. He then settled in Cooperstown, New York, and began the practice of law. In 1830 he removed to Albany, having been appointed adjutant general of the state by Governor Enos B. Throop, and in 1833 was appointed secretary of state and superintendent of common schools, publishing during this period numerous reports concerning the schools, and also a very important report in relation to a geological survey of the state (1836). He was a prominent member of the "Albany Regency," who practically ruled the Democratic Party of that day. Going out of office in 1840, on the defeat of the democratic candidates and the election of General Harrison to the presidency, he turned to literary pursuits, and was editor-in-chief of "The Northern Light," a journal of a high literary and scientific character, which was published from 1841 till 1843. In 1841 he was elected a member of the assembly. In the following year he went abroad, and spent nearly two years in Madeira, Spain, and Italy. From 1845 till 1849 he was a U. S. senator, being elected as a Democrat, when he became involved in the Free-soil movement, against his judgment and will, but under the pressure of influences that it was impossible for him to resist. He always regarded the Free-soil movement as a great political blunder, and labored to heal the consequent breach in the Democratic Party, as a strenuous supporter of the successive Democratic administrations up to the beginning of the civil war. in 1848 the Free-soil Democratic Party as governor nominated him, but was overwhelmingly defeated by Hamilton Fish.

President Pierce appointed him assistant treasurer of New York, and obtained his consent to be minister to France, but the nomination was never made. In the canvass of 1856 he supported Buchanan and Breckenridge, and in 1860 earnestly opposed the election of Mr. Lincoln, voting for Breckenridge and Lane. In May 1861, he was appointed postmaster of New York, after the defalcations in that office. On 10 January 1861, at the urgent request of the leading bankers and financiers of New York, President Buchanan appointed him secretary of the treasury, and he held that office until the close of the administration. His appointment immediately relieved the government from a financial deadlock, gave it the funds that it needed but had failed to obtain, and produced a general confidence in its stability. When he took the office there were two revenue cutters at New Orleans, and he ordered them to New York. The captain of one of them, after consulting with the collector at New Orleans, refused to obey. Secretary Dix thereupon telegraphed: "Tell Lieutenant Caldwell to arrest Captain Breshwood, assume command of the cutter, and obey the order I gave through you. If Captain Breshwood, after arrest, undertakes to interfere with the command of the cutter, tell. Lieutenant Caldwell to consider him as a mutineer, and treat him accordingly. If any one attempts to haul down the American flag, shoot him on the spot." At the beginning of the civil war he took an active part in the formation of the Union defense committee, and was its first president; he also presided at the great meeting in Union square, 24 April 1861.

On the president's first call for troops, He organized and sent to the field seventeen regiments, and was appointed one of the four major generals to command the New York state forces. In June following he was commissioned major general of volunteers, and ordered to Washington by General Scott to take command of the Arlington and Alexandria department. By a successful political intrigue, this disposition was changed, and he was sent in July to Baltimore to take command of the Department of Maryland, which was considered a post of small comparative importance ; but, on the defeat of the Federal forces at Bull Run, things changed; Maryland became for the time the centre and key of the national position, and it was through General Dix's energetic and judicious measures that the state and the City were prevented from going over to the Confederate cause. In May 1862, General Dix was sent from Baltimore to Port Monroe, and in the summer of 1863, after the trouble connected with the draft riots, he was transferred to New York, as commander of the Department of the East, which place he held until the close of the war. In 1866 he was appointed naval officer of the port of New York, the prelude to another appointment during the same year, that of minister to France. In 18';2 he was elected governor of the state of New York as a Republican by a majority of 53,000, and, while holding that office, rendered the country great service in thwarting the proceedings of the inflationists in congress, and, with the aid of the legislature, strengthening the national administration in its attitude of opposition to them.

On a renomination, in 1874, he was defeated, in consequence partly of the reaction against the president under the "third-term" panic, and partly of the studious apathy of prominent Republican politicians who desired his defeat. During his lifetime General Dix held other places of importance, being elected a vestryman of Trinity Church (1849) and in 1872 comptroller of that corporation, delegate to the convention of the diocese of New York, and deputy to the general convention of the Episcopal Church. In 1853 he became president of the Mississippi and Missouri railway company, and in 1863 became the first president of the Union Pacific railroad company, an office which he held until 1868, also filling a similar place for a few months in 1872 to the Erie railway company. He married Catharine Morgan. adopted daughter of John J. Morgan, of New York, formerly member of congress, and had by her seven children, of whom three survived him. He was a man of very large reading and thorough culture, spoke several languages with fluency, and was distinguished for proficiency in classical studies, and for ability and elegance as an orator. Among his published works are "Sketch of the Resources of the City of New York" (New York, 1827); "Decisions of the Superintendents of Common Schools" (Albany, 1837); "A Winter in Madeira, and a Summer in Spain and Florence" (New York, 1850; 5th ed., 1853); " Speeches and Occasional Addresses " (2 vols., 1864);" Dies Irae," translation (printed privately, 1863; also revised ed., 1875); and "Stabat Mater," translation (printed privately, 1868).

His eldest son, Morgan, clergyman, born in New York City, 1 November 1827, received "his early education and training in Albany, where he resided till 1842. He was graduated at Columbia in 1848, and at the general Theological seminary of the Episcopal Church in 1852, was ordained deacon the same year, and priest in 1853.

In September 1855, he was appointed an assistant minister in Trinity parish, New York. In 1859 he was chosen assistant rector of the same parish, and on Dr. Berrian's death became rector, 10 November 1862. Dr. Dix has been indefatigable in the labors of his office as rector of the largest parish in America, as well as in the service of the Episcopal Church in general, and was chosen president of the house of deputies at the general convention that was held in Chicago in October 1886. He has published a "Commentary on the Epistle to the Romans" (1864); "An Exposition of the Epistles to the Galatians and Colossians" (1865); " Lecture on the Pantheistic Idea of an Impersonal Substance Deity" (1865); "Essay on Christian Art" (1853); "Lectures on the Two Estates: that of the Wedded in the Lord, and that of the Single for the Kingdom of Heaven's Sake" (1872); "Memoirs of John Adams Dix" (New York, 1883), quarto edition of same (printed privately, 1883)" "The Gospel and Philosophy, Six Lectures" (1886); and two volumes of Sermons (1878, 1886). He has also issued several manuals of devotion, and occasional sermons.

Another son, Charles Temple, artist, born in Albany, 25 February 1838 ; died in Rome, Italy, 11 March 1873, studied at Union, and early turned his attention to art. He had made good progress in his studies when, at the beginning of the civil war, he was chosen aide-de-camp on the staff of his father, and won credit from his faithful performance of duty. On the return of peace he devoted himself anew to his profession, and soon established a name among the most promising of our marine painters. His "Sunset in Capri" is a spirited study of sea and shore.