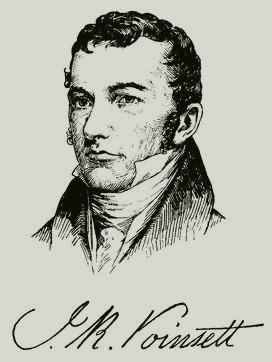 POINSETT, Joel Roberts, statesman, born in Charleston, South Carolina, 2 March, 1779; died in Statesburg, South Carolina, 12 December, 1851. He was of Huguenot descent, and the last of his family. He was educated at Timothy Dwight's school in Greenfield, Connecticut, and in England, and then studied medicine at Edinburgh university, and military science at Woolwich academy. His father induced him to abandon his intention of entering the army and become a student of law, but feeble health obliged him to go abroad again, and he travelled widely in Europe and Asia. While he was in St. Petersburg the czar offered him a commission in the Russian army. On his return to the United States in 1809 he asked President Madison for military employment, and the latter was about to make him quartermaster-general of the army, but the secretary of war objected, and Mr. Poinsett was sent by the government to South America to inquire into the condition of the inhabitants of that continent and their prospects of success in their struggle with Spain for independence. While he was in Chili the Spanish authorities of Peru, hearing that war had begun between Spain and the United States, seized several American merchant vessels, and then, invading Chilian territory, captured others at Talcahuano. Poinsett put himself at the head of a considerable force that was placed at his disposal by the Republican government of Chili, and, attacking the Spaniards, retook the ships. He was at Valparaiso during the fight between the "Essex" and the "Phoebe" and "Cherub" (see PORTER, DAVID), and wished to return home at once to enter the army, but the British naval authorities refused to let him go by sea, and, after crossing the Andes in April and meeting with various delays, he reached the United States after the declaration of peace. On his return he was elected to the South Carolina legislature, where he interested himself in projects of internal improvement, and secured the construction of a road over the Saluda mountain. He was afterward chosen to congress as a Federalist, and served two terms in 1821-'5, advocating the cause of the South American republics and that of Greek independence. In 1822 he discharged an important special mission to Mexico during the reign of Hurbide, and in 1825 he returned to that country as United States minister. During his term of office, which lasted till 1829, he negotiated a treaty of commerce, and maintained his independence with spirit and courage in the midst of many revolutionary outbreaks. He was accused by the Church party of interfering against them, but justified his course in a pamphlet after his return. At the request of Freemasons in Mexico he sent for charters for their lodges to the Grand lodge of New York, and he was consequently accused of introducing Masonry into the country. On his return to his native state he became the leader of the Union party there in the struggle against nullification, opposing it by his speeches and in the public press, and has been credited with the military organization of the supporters of the National government in Charleston. He was authorized by President Jackson to obtain arms and ammunition from the government supplies in the harbor, and it was said by some that he had been secretly commissioned a colonel. During Van Buren's administration he held the portfolio of war in the cabinet. In this office he improved the field-artillery of the army, and in 1840 strongly recommended that congress should aid the states in reorganizing their militia. This was his last public office, and he afterward lived in retirement. He was an earnest opponent of the Mexican war. Poinsett was the author of various essays and orations on manufacturing and agricultural topics, and of a discourse on the "Promotion of Science" (in 1841) at the first anniversary of the National institution, to which he gave a valuable museum. He took much interest in botany, and the "Poinsettia Pulcherrina," a Mexican flower, which he introduced into this country, was named for him. He was also the founder of an academy of fine arts at Charleston, which existed for several years, and published "Notes on Mexico, made in 1822, with an Historical Sketch of the Revolution" (Philadelphia, 1824). He left a mass of correspondence and other papers, which remain unpublished. Columbia gave him the degree of LB. D. in 1825. A portrait of Poinsett, by John Wesley Jarvis, was presented to the city of Charleston by William Courtenay in 1887.