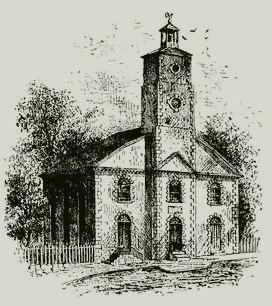 MATHEWS, James McFarlane, clergyman, born in Salem, New York, 18 March, 1785 ; died in New York city, 28 January, 1870. He was graduated at Union college in 1803, and at the theological seminary of the Associate Reformed church in 1807, and was associate professor of biblical literature in Dr. John M. Mason's theological seminary in 1812, founding the South Dutch church in Garden street, in which charge he continued till 1840. The engraving represents the old edifice, built in 1693 and taken down in 1813. In 1835 he built the Washington square church, a branch of the South Dutch church. From 1840 until his death he held no pastorate, but was active in ecclesiastical affairs, devoted much time to the cause of education, and delivered a series of lectures to students. He was a founder of the University of New York, and its first chancellor, holding office in 1831-'9. He organized and presided over the Christian union council, which met in New York in 1870, and his exertions in its behalf hastened his death. He was in official life for more than fifty years, and was a successful teacher and preacher. He received the degree of D. D. from Yale in 1823. Dr. Mathews is the author of "What is Your Life?" (New York, 1840); " The Bible and Men of Learning" (1855) ; "The Bible and Civil Government" (1858); and "Fifty Years in New York" (1858). His daughters, Joanna H. and Julia, have written Sunday-school and juvenile books.