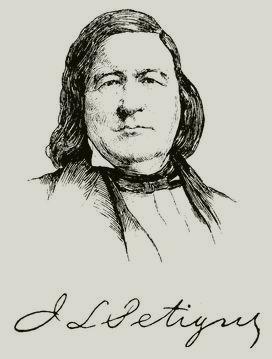 PETIGRU, James Lewis, statesman, born in Abbeville district, South Carolina, 10 March, 1789; died in Charleston, South Carolina, 3 March, 1863. On his father's side he was of mixed Scotch and Irish descent, and his maternal ancestors formed a part of the Huguenot colony that in 1695 emigrated to South Carolina to escape religious persecution in France. He was graduated at the University of South Carolina in 1809, admitted to the bar about two years afterward, and began practice in his native district, but soon removed to Charleston. He was state attorney-general in 1822-'30, succeeding Robert Y. Hayne, and during his occupation of that office took the highest place in the confidence of his constituents. But during the nullification difficulties of 1830-'2 he vigorously and eloquently opposed the doctrine of the state veto, and became a leader in the Union party, standing almost alone among the men of wealth, position, and reputation in the state. On the defeat of his party he lost his popularity, and suffered much opprobrium, although he remained without a rival at the bar. He was subsequently district attorney for a short time, which subjected him to further odium, and was later in the state legislature. The secession of South Carolina in 1860 found him too advanced in years to take an active part in political controversies, but he strongly opposed disunion, and in a letter to Reverdy Johnson, dated 16 April, 1861, in which he deplored the action of his state, he said: "What is to be the end of all this seems to me inscrutable. Hut even if the Gulf states and South Carolina do flake off forever, I shall never cease to witness with joy whatever increases the prosperity and honor of the United States." The great work of his life was the codification of the laws of South Carolina, which had been confided to him by the legislature, notwithstanding his well-known political principles. During the first year of the civil war he devoted himself almost exclusively to the completion of this work (Charleston, 1862). He was president of the South Carolina historical society, and published a "Semi-Centennial Oration," delivered at the College of South Carolina (Columbia, 1855), and "An Address before the South Carolina Historical Society" (Charleston, 1858). See his " Biography," by William J. Grayson (1866), and also a memorial volume including the proceedings of the Charleston bar (1867).--His daughter, Caroline, artist, born in Charleston, South Carolina, 24 May, 1819, was educated in her native city, and early developed artistic tastes. She married William A. Carson, of St. John's parish, South Carolina, in 1840. She was attached to the national cause, and in 1860 settled in New York city. She has recently lived in Rome, Italy, where she occasionally paints portraits. That of her father is among the best known of her works.