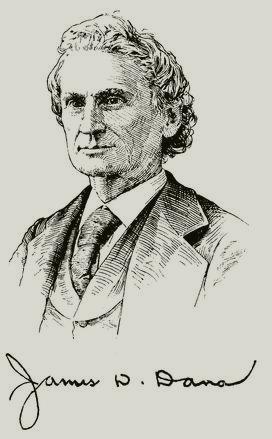 DANA, James Dwight, mineralogist, born in Utica, New York, 12 February 1813. He was attracted to New Haven by the reputation of Professor Benjamin Silliman, under whose guidance many of the subsequent leaders in American science received their earliest training. He was graduated in 1833 and appointed instructor of mathematics to midshipmen in the U. S. navy, and in this capacity visited the seaports of France, Italy, Greece, and Turkey while on the " Delaware" and the "United States." In 1836-'8 he was assistant in chemistry to Professor Silliman. Meanwhile, in December 1836, he was appointed mineralogist and geologist to the U. S. exploring expedition, then about to be sent by the government of the United States to the Southern and Pacific oceans under the command of Captain Charles Wilkes. The expedition sailed in August 1838, and Mr. Dana was on board the " Peacock" until it was wrecked on a sand-bar at the mouth of Columbia river. In June 1842, after an absence of three years and ten months, Mr. Dana returned home. Besides the mineralogy and geology, he had under his supervision the zoological departments, including the crustacea and corals. During the thirteen years that followed he was occupied principally in studying the material that he had collected, making drawings, and preparing the reports for publication. From 1842 till 1844 he resided in Washington, and then removed to New Haven, where he married Henrietta Frances, third daughter of Professor Silliman, and has since continued to reside. The results of his labors were given in his "Reports on ZoOphytes" (4to, with an atlas of 61 folio plates, 1846), in which he proposed a new classification, and described 230 new species; the "Report on the Geology of the Pacific" (4to, with an atlas of 21 plates, 1849); and the "Report on Crustacea" (4to, with an atlas of 96 folio plates, 1852-'4). The government in Washington published these, and only 100 copies of each were issued. With few exceptions, Mr. Dana himself made the drawings in the atlases.

He was appointed Silliman professor of natural history and geology at Yale in 1850, and entered on the administrations of the chair in 1855. The subsequent delivery of the lectures on natural history by others led to a change in the title of the professorship, in 1864, to that of geology and mineralogy. Professor Dana became, about 1850, associate editor of the "American Journal of Science and Arts," founded by the elder Silliman in 1819. Subsequent to the death of Professor Silliman he became its senior editor, and now, in conjunction with his son, Edward S. Dana, continues its publication. In 1872 the Geological society of London conferred on him its Wollaston medal, and in 1877 he received the Cop-ley gold medal from the Royal society of London. He is a member of scientific societies in the United States and abroad, including the Royal society of London, the Institute of France, the Royal academy of the Lineei of Rome, the Royal academies of Berlin, Vienna, and St. Petersburg, and was one of the original members of the National academy of sciences in the United States. Professor Dana was elected president of the American association for the advancement of science in 1854, and in August of the following year delivered his retiring address at the Providence meeting.

--His son, Edward Salisbury Dana, raineralogist, born in New Haven, Connecticut, 16 November 1849, was graduated at Yale in 1870, where, in 1876, he received the degree of Ph.D., and has also studied in Iteidelberg and in Vienna. In 1874 he became tutor in mathematics at Yale, and also curator of the mineral cabinet in the Peabody museum. He was appointed assistant professor of natural philosophy and astronomy in 1879, and in 1875 became one of the editors of Silliman's "American Journal of Science." Dr. Dana is a member of many scientific societies, and in 1884 was elected a member of the National academy of sciences. In 1885 he was made a trustee of the Peabody museum of Yale. Besides memoirs on mineralogical and kindred subjects, contributed to scientific jour-rials in the United States and in Europe, he has published "Appendix II." (1875) and "Appendix III." (1883) of Dana's "System of Mineralogy"; "Text-Book of Mineralogy" (New York, 1877); and " Text-Book of Mechanics" (1881).