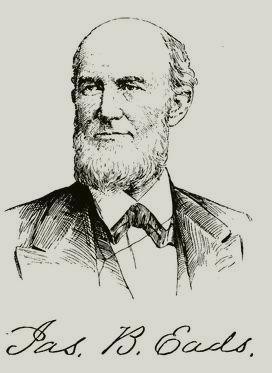 EADS, James Buchanan, engineer, born in Lawrenceburg, Indiana, 23 May 1820 ; died in Nassau, N. P., Bahaman islands, 8 March 1887. He early showed a great interest in machinery, and at the age of ten constructed models of sawmills, fire engines, steamboats, and other machines. In 1833 he settled in St. Louis, where, besides being variously employed, he acquired considerable knowledge of civil engineering and cognate subjects. He constructed a diving bell boat in 1842 to recover the cargoes of sunken steamers, and soon afterward designed larger boats, with novel and powerful machinery, for pumping out the sand and water, and lifting the entire hull and cargo. Many valuable steamers were set afloat and restored to usefulness by his methods. He disposed of his interests in these inventions in 1845, and then established in St. Louis the first glassworks west of the Ohio River.

In 1856 he made a proposition to congress to keep the channels of the Mississippi, Missouri, Ohio, and Arkansas rivers clear of snags, wrecks, and other obstructions for a term of years, but this rejected. In 1861 he was called to Washington and consulted by the president and his cabinet in relation to the practicability of using light ironclad vessels on the Mississippi and its tributaries. Soon afterward he designed and constructed eight ironclad steamers, fully equipped, within 100 days. These were employed in the capture of Fort Henry in February 1862, a month earlier than the conflict between the "Merrimae" and "Monitor." Subsequently, in 1862, he constructed numerous other ironclads and motorboats, which proved of great value in the campaigns of Grant and in the capture of Mobile by Farragut.

From 1867 till 1871 he was engaged in the construction of the steel arch bridge across the Mississippi at St. Louis, The central arch of this bridge has a clear span of 520 feet, and has been pronounced the finest specimen of metal arch construction in the world. This structure ranks among the noted bridges of the world. On the completion of this enterprise, Mr. Eads turned his attention to the deepening of the Mississippi by means of jetties. His plans, which were strongly opposed by the chief engineers of the U. S. army, to whom the government naturally looked for official advice, were submitted to congress, and finally a bill was passed granting him permission to attempt the improvement of the South Pass. Four years after he began work the U. S. inspecting officer reported that the maximum depth proposed had been secured throughout the jetty. This was a great triumph for Mr. Eads, as it was a practical demonstration of his theories. Subsequently he outlined one of the grandest plans that hydraulic engineering has ever undertaken, having for its object the extension of the deep water from the Gulf of Mexico to the mouth of the Ohio, into the very heart of the Mississippi valley.

This magnificent channel was to be made permanent by practically putting an end to the caving of its banks. In 1880 congress reported in favor of the adoption of the jetty system, as devised by him, and appointed a commission, of which he was made a member. A large sum of money was appropriated by congress for the work, and along a small portion of the River the improvement was constructed. Congress afterward discontinued its appropriations, but enough had been done to establish the entire practicability of the plan. More recently Mr. Eads proposed a ship railway to be constructed across the isthmus of Tehuantepec, and after failing to induce the government to attempt the execution of this work, he formed a private company, for the incorporation of which a bill was passed by the U. S. Senate in 1887. Such an undertaking was shown by him to be entirely feasible, and he considered it far more economical than a canal.

It was Mr. Eads's purpose to devote the remaining energies of his life to the prosecution of this scheme. He also examined and reported upon the bar at the mouth of the St. John's River, Fla., the improvements of the Sacramento River, the harbor of Toronto, the port of Vera Cruz, the harbor of Tampico, the harbor of Galveston, and the estuary and port of the Mersey, in England. Mr. Eads was president of the St. Louis academy of sciences for two terms, and in 1872 was elected a member of the National academy of sciences. The degree of LL. D. was conferred upon him by the University of Missouri. In 1881 he addressed the British association for the advancement of science at York on the improvement of the Mississippi, and also upon the Tehuantepee ship canal. Three years later he received the Albert medal of the Society of arts in token of its appreciation of the services he had rendered to the science of engineering. Mr. Eads was the first citizen of the United States upon whom this medal has been conferred. He contributed occasional technical papers on bridge construction and the application of the jetty system to rivers to engineering journals.