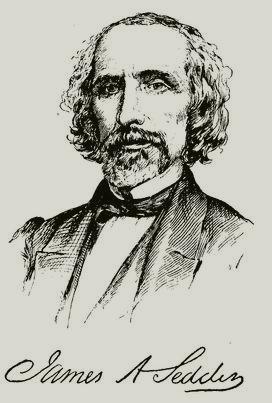 SEDDON, James Alexander, lawyer, born in Falmouth, Stafford County, Virginia, 13 July, 1815 ; died in Goochland county, Virginia, 19 August, 1880. Thomas Seddon, his father, who was first a merchant and then a banker, was descended from John Seddon, of Lancashire, England, who settled in Stafford county, Virginia, in colonial days. Susan Alexander, his mother, was a lineal descendant of the Earl of Sterling. Throughout his life Mr. Seddon was of a frail constitution, and, owing to his delicate health, his early education was much neglected. The knowledge of the ancient classics and literature, for which he was noted in af-ter-life, was mainly self-acquired. At the age of twenty-one he entered the law-school of the University of Virginia, where he was graduated with the degree of B.L. He settled in Richmond in the practice of the law, and almost immediately advanced to the front rank of the bar. In 1845 he was nominated by the Democratic party for congress, and, though the district was a doubtful one, he was elected by a handsome majority. In 1847 he was renominated, but, not being in accord with the resolutions of the nominating convention, he declined, and the Whig candidate was elected. In 1849 he was re-elected, serving from 3 December, 1849, till 3 March, 1851. Owing to his health, he declined another nomination at the end of his term, and retired to Sabot Hill, his estate on James river above Richmond. While in congress he took part in most of the important debates of the period, and was recognized as a leader of his party. In 1846 he participated actively in the debates upon the reform revenue bill, advocating the principles of free-trade. In 1860 the excitement of impending war brought him again into politics. On 19 January, 1861, he was appointed by the legislature of Virginia a commissioner with John Tyler and others to the Peace convention, which met at the call of Virginia in Washington on 4 February He represented Virginia in the committee upon resolutions, and, in accordance with the instructions of his state, made a minority report recommending that the constitution should be amended according to the resolutions that had been introduced in the senate by John J. Crittenden and by a further article expressly recognizing the right of any state peaceably to withdraw from the Union. He became a member of the first Confederate congress, and in November, 1862, having been chosen by Jefferson Davis as secretary of war, became a member of his cabinet. He devoted himself to the duties of his office until 1 January, 1865, when he retired finally from public life to his country estate.