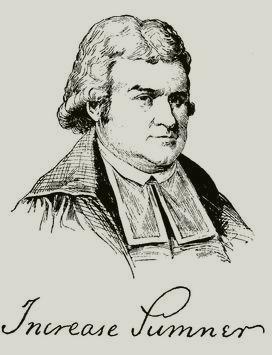 SUMNER, Increase, jurist, born in Roxbury, Massachusetts, 27 November, 1746; died there, 7 June, 1799. His ancestor, William, emigrated from England to Dorchester, Massachusetts, about 1635, and his father, Increase, was a prosperous farmer and a select-man of Roxbury in 1753 and 1756. The son, after graduation at Harvard in 1767, studied law under Samuel Adams while teaching at Roxbury, was admitted to the bar in 1770, and began practice in his native town. He was a member of the lower house of the legislature in 1776-'80, and senator till 1789. In the mean time he was a member of the convention of 1777 for agreeing on a form of government, and of the State constitutional convention in 1779. He was elected to congress in 1782, but preferred to accept an appointment as associate judge of the supreme judicial court, remaining the bench till o n 1797. He was one of the committee on the revision of the laws of the state in 1785, a delegate to the convention that adopted the constitution of the United States in 1789, and at the close of his judicial office was elected governor for three successive terms. Judge Sumner's ability and intimate relations with his kinsman, John Adams, and other statesmen, gave him great influence in public affairs. -His son, William Hyslop, soldier, born in Roxbury, 4 July, 1780; died in Jamaica Plains, Massachusetts, 24 October, 1861, was graduated at Harvard in 1799, admitted to the bar in 1802, and in 1808-'19 was a member of the legislature. In 1814 he was sent to put the coast of Maine in a state of defence against a threatened invasion, and in 1818-'35 he served as adjutant-general of the state, with the rank of brigadier-general. He organized in 1833 the East Boston company. He was one of the original members of the Massachusetts horticultural society. His works include "An Inquiry into the Importance of the Militia" (Boston, 1823) ; "Observations on National Defence" (1824) ; "Reminiscences" (1854); "Memoir of Increase Sumner, Governor of Massachusetts" (1854); "Reminiscences of General Warren and Bunker Hill" (1858); "History of East Boston" (1858); and "Reminiscences of Lafayette's Visit to Boston" (1859).

Start your search on Increase Sumner.