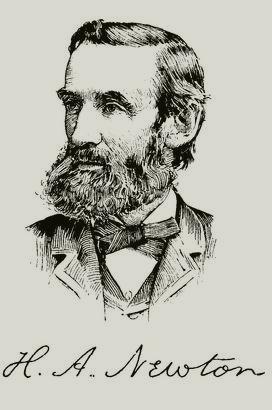 NEWTON, Hubert Anson, mathematician, born in Sherburne, New York, 19 March, 1830. He was graduated at Vale in 1850, after which he studied higher mathematics. In 1852 he was appointed tutor, and entering on that office in January, 1853, he was given charge of the entire mathematical department at once, owing to the illness of Professor Anthony D. Stanley. He was elected full professor in 1855, and, after spending a year abroad, began the active discharge of the duties of his chair, which he has since continued without interruption. His scientific work in pure mathematics includes researches " On the Construction of Certain Curves by Points," " Certain Transcendental Curves," and similar papers, but his most valuable investigations have been in connection with meteors and like bodies. By collecting and discussing old and recent observations of November showers, he demonstrated that the period of revolution of these shooting-stars must have one of five accurately determined values. From similar sources he established the secular motion of the node of their mean orbit and explained how the real orbit could then be distinguished from the others by the calculation of the secular motion of the node for each of the assigned 1 periods. This computation was subsequently made by other authorities, and so it became possible to connect the stream of meteors with the comet of 1866 so soon as the orbit of that comet was computed. In 1864 he published a memoir upon the sporadic meteors, in which he determined their numbers, their frequency in the space traversed by the earth, and the fact that most of them moved in long orbits like the comets. Much of his work has been in the direction of examining results that have been obtained by others, from which he has deduced laws or general principles applicable to meteors. He is regarded both in this country and abroad as one of the highest authorities on this subject. In 1864 he undertook and carried through successfully the task of securing the introduction in the arithmetics of the United States of an adequate presentation of the metric system of weights and measures. In 1868 he received the degree of LL.D. from the University of Michigan, and he was one of the original members, appointed by congress, to constitute the National academy of sciences. He was elected an associate of the Royal astronomical society of London in 1872, and a fellow of the Royal philosophical society of Edinburgh in 1886. Besides being a member of other scientific societies, he has been president of the Connecticut academy of arts and sciences, has been a member of the American association for the advancement of science since 1850, was its vice-president in 1875, when his retiring address took the form of a strong plea for more study of mathematics by men of science, and was its president in 1885. He has been greatly interested in the development of Yale, and in its council has had much influence. Professor Newton is secretary and executive officer of the board of managers of the Yale university observatory, and is an associate editor of the "American Journal of Science." His publications have been restricted almost exclusively to scientific papers that have apI>eared in the "Memoirs" of the National academy of sciences, and in the "American Journal of Science."