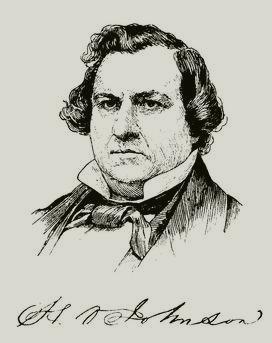 JOHNSON, Herschel Vespasian, statesman, born in Burke county, Georgia, 18 September, 1812; died in Jefferson county, Georgia, 16 August, 1880. He was graduated at the University of Georgia in 1834, studied law, and practised in Augusta, Georgia, till 1839, when he removed to Jefferson county. In 1840 he entered polities as a Democrat, and in 1844 he removed to Milledgeville, serving also in that year as a presidential elector. He was subsequently appointed United States senator in place of Walter T. Colquitt, resigned, serving from 14 February, 1848, till 3 March, 1849. In November of the latter year he was elected, by the legislature of Georgia, judge of the superior court for the Ocmulgee district, which office he occupied until his nomination as governor in 1853, when he resigned. He had in the mean time been a member of the Southern Rights party, but when Georgia resolved to acquiesce in the compromise measures of 1850 he was one of the first to declare that the causes that had led to the organization of that movement had ceased to exist. He was elected governor in 1853, and re-elected in 1855. In 1860 he was nominated for the vice presidency on the ticket with Stephen A. Douglas. He opposed the secession of Georgia to the last; but when the fact was accomplished he cast his lot with his state, and was chosen to the Confederate senate. In 1864 he began the "peace movement" on the basis of state sovereignty. In September of the same year he held a conference with Andrew Johnson regarding reconstruction, and the following month presided over the Georgia constitutional convention. In January, 1866, on the restoration of his state to the Union, he was chosen as one of the two United States senators to which Georgia was entitled, but was unable to serve under the reconstruction acts of congress, he then resumed the practice of the law, and when his disabilities were finally removed he was, in 1873, placed on the circuit bench for the term of eight years, which office he filled until his death. As an orator, a constitutional lawyer, and a jurist. Judge Johnson took high rank.