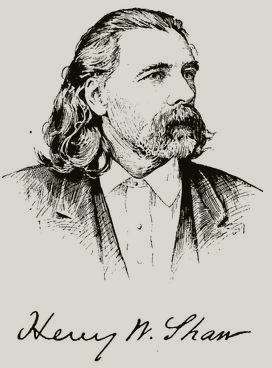 SHAW, Henry Wheeler, humorist, born in Lanes-borough, Massachusetts, 21 April, 1818; died in Monterey, California, 14 October, 1885. His father, Henry Shaw, was a member of the Massachusetts legislature for twenty-five years, and was also a member of congress in 1818-'21. The son was admitted to Hamilton about 1832, but, becoming captivated with stories of western life and adventure, abandoned all thoughts of college and turned his steps westward. He worked on steamboats on Ohio river, then became a farmer, and afterward an auctioneer. In 1858 he settled in Poughkeepsie, New York, as an auctioneer, and in that year he wrote his first article for the senior editor of this work, followed in 1859 by his " Essay on the Mule." No attention was paid to these or other articles written by him, and Mr. Shaw concluded that as an author he was a failure. A year later he was induced to make another effort, and decided to adopt a method of spelling that more nearly represented his style of enunciation. The essay on the mule became "An Essa on the Muel, bi Josh Billings," and was sent to a New York paper. It was reprinted in several of the comic journals, and extensively copied. His most successful literary venture was a travesty on the "Old Farmers' Almanac," published for many years by the Thomas family, "Josh Billings' Farmers Almanax" (New York, 1870). Two thousand copies were first printed, and for two months few were disposed of, but during the next three months over 90,000 were printed and sold. For the second year 127,000 copies were distributed, and for the ten years of its existence the sales were very large. He began to lecture in 1863, his lectures being a series of pithy sayings without care or order, delivered in an apparently awkward manner. Their quaintness and drollery, coupled with mannerisms peculiarly his own, made him popular on the platform. For twenty years previous to his death he contributed regularly to the "New York Weekly," and the articles appearing in the "Century" magazine under the pen-name of "Uncle Esek " are said to be his. Besides the books mentioned above, he published "Josh Billings, his Sayings" (New York, 1866); "Josh Billings on Ice" (1875); "Every Boddy's Friend" (1876) ; "Josh Billings's Complete Works," in one volume (1877); and "Josh Billings's Spice-Box" (1881). See his "Life," by Francis S. Smith (New York, 1883).