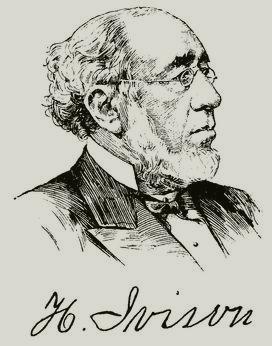 IVISON, Henry, publisher, born in Glasgow, Scotland, 25 December, 1808; died in New York city, 26 November, 1884. He came to the United States in 1820, and was apprenticed to William Williams, of Utica, for the purpose of learning the bookbinder's trade. After serving his time he continued with his employer until about 1830, when he established the house of H. Ivison and Co. in Auburn, New York In 1846 he removed to New York city. and became associated with Mark H. Newman in the publishing business, and after Mr. Newman's death in 1853 the firm became Ivison and Phinney. This house made a specialty of publishing educational works, and became one of the largest in the United States, having a list of over 300 school-books, including " Webster's School Dictionary," "Dana's Geology," "Gray's Botany," "Robinson's Mathematics,"" Fasquelle's French Course," and "Wells's Scientific Series." On the retirement of Mr. Phinney in 1866, the firm-name became Ivison, Blakeman, Taylor and Co., and in 1880 Mr. Ivison retired from active participation in the business, and was succeeded by his only son, David B. lvison.

Start your search on Henry Ivison.