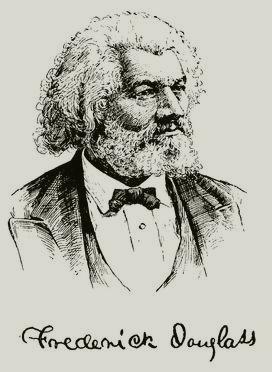 DOUGLASS, Frederick, orator, born in Tuckahoe, near Easton, Talbot County, Maryland, in February 1817. His mother was a Negro slave, and his father a white man. He was a slave on the plantation of Colonel Edward Lloyd, until at the age of ten he was sent to Baltimore to live with a relative of his master. He learned to read and write from one of his master's relatives, to whom he was lent when about nine years of age. His master allowed him later to hire his own time for three dollars a week, and he was employed in a shipyard, and, in accordance with a resolution long entertained, fled from Baltimore and from slavery, 3 September., 1838. He made his way to New York, and thence to New Bedford, Massachusetts, where he married and lived for two or three years, supporting himself by day labor on the wharves and in various workshops. While there he changed his name from Lloyd to Douglass. He was aided in his efforts for self-education by William Lloyd Garrison. In the summer of 1841 he attended an antislavery convention at Nantucket, and made a speech, which was so well received that he was offered the agency of the Massachusetts antislavery society. In this capacity he traveled and lectured through the New England states for four years. Large audiences were attracted by his graphic descriptions of slavery and his eloquent appeals. In 1845 he went to Europe, and lectured on slavery to enthusiastic audiences in nearly all the large towns of England, Ireland, Scotland, and Wales.

In 1846 his friends in England contributed $750 to have him manumitted in due form of law. He remained two years in Great Britain, and in 1847 began at Rochester, New York, the publication of "Frederick Douglass's Paper," whose title was changed to "The North Star," a weekly journal, which he continued for some years. His supposed implication in the John Brown raid in 1859 led Governor Wise, of Virginia, to make a requisition for his arrest upon the governor of Michigan, where he then was, and in consequence of this Mr. Douglass went to England, and remained six or eight months. He then returned to Rochester, and continued the publication of his paper. When the civil war began in 1861 he urged upon President Lincoln the employment of colored troops and the proclamation of emancipation.

In 1863, when permission was given to employ such troops, he assisted in enlisting men to fill colored regiments, especially the 54th and 55th Massachusetts. After the abolition of slavery he discontinued his paper and applied himself to the preparation and delivery of lectures before lyceums. In September 1870, he became editor of the "New National Era " in Washington, which was continued by his sons, Lewis and Frederick. In 1871 he was appointed assistant secretary to the commission to Santo Domingo; and on his return President Grant appointed him one of the territorial council of the District of Columbia. In 1872 he was elected presidential elector at large for the state of New York, and was appointed to carry the electoral vote of the state to Washington. In 1876 he was appointed U. S. marshal for the District of Columbia, which office he retained till 1881, after which he became recorder of deeds in the District, from which office he was removed by President Cleveland in 1886. In the autumn of 1886 he revisited England, to inform the friends he had made as a fugitive slave of the progress of the African race in the United States, with the intention of spending the winter on the continent and the following summer in the United Kingdom. His published works are entitled "Narrative of my Experienee in Slavery" (Boston, 1844); " My Bondage and my Freedom" (Rochester, 1855): and "Life and Times of Frederick Douglass" (Hartford, 1881).

Start your search on Frederick Douglass.