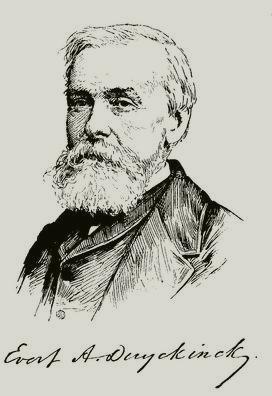 DUYCKINCK, Evert Augustus, author, born in New York City, 23 November 1816: died there, 13 August 1878. He was the son of Evert Duyckinck, who was at his death the oldest publisher in New York City. The son was graduated at Columbia in 1835, studied law with John Anthon, being admitted to the bar in 1887, but, after spending a year in Europe, devoted himself to literature. Previous to going abroad he had contributed articles on the poet Crabbe, the works of George Herbert, and Oliver Goldsmith, to the " New York Review." In 1840 he began with Cornelius Mathews a monthly periodical, entitled "Arcturus," which was continued till 1842. To this magazine he contributed articles on authors at home and abroad, in 1847 he entered upon the editorship of " The Literary Worhl," a weekly review of books, the fine arts, etc., which, with the exception of one year, was carried on by his brother George and himself to the close of 1853. Memorials of Francis L. Hawks, D.D., LL, D. (1867; printed, 1871); Henry T. Tuckerman (1872); and James W. Beekman (1877), were read by him before the New York historical society" similar memorials of John Wolfe (1872) and Samuel G. Drake (1876) were read, the last named written for the American ethnological society (1876).

In 1854 the brothers were again united in the preparation of "The Cyclopaedia of American Literature" (2 vols., New York, 1855; enlarged eds., 1865 and 1875). He published "Wit and Wisdom of Sydney Smith," with a memoir (New York, 1856); an American edition of Willroot's "Poets of the Nineteenth Century" (1858). Immediately after the death of Washington Irving, Mr. Duyckinck gathered together and published in one volume a collection of anecdotes and traits of the great author, under the title of "Irvingiana" (1859); "History of the War for the Union" (3 vols., 1861'5); "Memorials of John Allan" (1864); " Poems relating to the American Revolution, with Memoirs of the Authors" (1865); "Poems of Philip Freneau," with notes and a memoir (1865);" National Gallery of Eminent Americans" (2 vols., 1866); "History of the World from the Earliest Period to the Present Time" (4 vols., 1870); and an extensive series of "Biographies of Eminent Men and Women of Europe and America" (2 vols., 1873'4). His last literary work was the preparation, with William Cullen Bryant, of an edition of Shakespeare, which is still (1887) in manuscript. In January 1879, a meeting in his memory was held by the New York historical society, and a biographical sketch of Mr. Duyekinek was read by William Allen Butler. See also a memoir of him by Samuel Osgood, D. D., LL. D, (Boston, 1879).

His brother, George Long Duyckinck, writer, born in New York City, 17 October 1828; died there, 30 March 1868, after attending Geneva College entered the University of New York, and was graduated there in 1843. He studied law and was admitted to the bar, but never practiced. After the completion of his legal studies he traveled extensively in Europe in 1847'8, and on his return became joint editor with his brother Evert of the "Literary World," afterward becoming joint author with his brother of the "Cyclopaedia of American Literature." He then revisited Europe, and, on his return in 1857, entered on a separate career of authorship in a congenial department. He was by early training and long-established choice warmly attached to the liturgy and order of the Protestant Episcopal Church, and especially interested in its biographical literature. To this he devoted himself, and, having been elected treasurer of the Sunday School union and Church book society, he began a series of biographies of English clergymen, with a view to attract the interest of American readers. The first of these was the "Life of George Herbert" (New York, 1858), followed by the lives of Bishop Thomas Ken (1859), Jeremy Taylor (1860), and Hugh Latimer (1861). These memoirs were unpretending in form, and were condensed to a simple narrative; but they are regarded as contributions of high value to the class of works to which they belong. Mr. Duyckinck contemplated writing the life of Bishop Leighton, but before entering on its preparation he was seized with the illness that terminated his blameless and beautiful life.