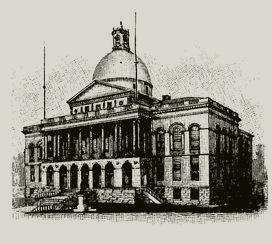 WASHBURN, Emory, jurist, born in Leicester, Massachusetts, 14 February, 1800; died in Cambridge, Massachusetts, 18 March, 1877. His grandfather, Seth Washburn, grandson of John Washburn, who was the first secretary of the Massachusetts Bay company, was born in Bridgewater, Massachusetts, in 1728, and married the granddaughter of Mary Chilton, the first white person that stepped upon Plymouth Rock. He held various town offices in Leicester, and served at different times in each branch of the legislature. He was in the campaign against the Indians in New Hampshire in 1749, and in the battle of Bunker Hill as a captain. His son, Joseph (1755-1807), the father of Emory, was lieutenant in the 15th Massachusetts regiment, was on duty at the capture of Burgoyne at Saratoga, served afterward under Washington in New Jersey, and after the war held, among other offices, that of deputy sheriff of Worcester county till his death. Emory studied for two years at Dartmouth, and was graduated at Williams in 1817, studied law at Harvard, was admitted in 1821 to the bar in Lenox, and practised in his native town till 1828, when he removed to Worcester, where he was eminent in his profession for nearly thirty years, and became the partner of Governor John Davis He was in the lower house of the legislature in 1826-'7 and 1888, and made during his first term the first report that suggested the feasibility of a railroad between Boston and Albany. He served in the state senate in 1841-'2, being chairman of the judiciary committee, and from 1844 till 1848 was judge of the court of common pleas, he was elected governor in 1858, and re-elected for the succeeding term, being the last Whig governor in Massachusetts, and in 1856 he was appointed Bussy professor of law in Harvard. Resigning his professorship in 1876, he opened a law-office in Cambridge, and represented that city in the legislature until his death. The illustration is a view of the statehouse in Boston, which is on Beacon hill, opposite the common. The degree of LB. D. was conferred upon him by Harvard and Williams in 1854. He was a member of the board of education, took a prominent part in the establishment of the Worcester county free institute of industrial science, was a trustee of Williams college, a member of the International code committee, a fellow of the American antiquarian society, and a member of the Massachusetts historical society, the American academy of arts and sciences, and other learned societies, before which he frequently delivered public addresses on timely topics. Governor Washburn's writ-rags, many of them on genealogical and historical subjects, exhibit scholarship and research, while his legal works are standard authorities in the law-schools and courts of this country. His most important works are a "Judicial History of Massachusetts, 1680-'75 "(Boston, 1840) ; "History of Leicester" (1860); "Treatise on the American Law of Real Property" (2 vols., 1860-'2; 8d ed., 1868); "Treatise on the American Law of Easements and Servitudes" (Philadelphia, 1868 ; Boston, 1867) ; a pamphlet on the "Testimony of Experts" (1866)" and "Lectures on the Study and Practice of the Law" (1871). He also contributed an introduction to Reverend Calvin Durfee's "History of Williams College, Williamstown, Massachusetts" (Boston, 1860).

Start your search on Emory Washburn.