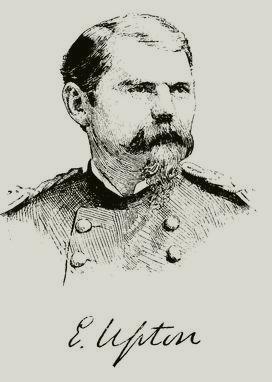 UPTON, Emory, soldier, born in Batavia, Genesee County, New York, 27 August, 1839; died in San Francisco, California, 14 March, 1881. He was educated at Oberlin college and at the United States military academy, where he was graduated in May, 1861, eighth in a class of forty-five, and made 2d lieutenant in the 4th artillery. On 14 May he became 1st lieutenant in the 5th artillery. During the first year of the civil war he was assigned to duty in the defences of Washington, and was present at Bull Run, where he was wounded. He commanded his battery during the early part of 1862 in the Virginia, peninsular campaign, including all actions to Glendale, and subsequently a regiment and brigade of artillery in the Maryland campaign. He was appointed colonel of the 121st New York volunteers in October, 1862, and was conspicuously engaged at the head of a brigade of the 6th corps, Army of the Potomac, until the close of 1863. He received the brevet of major on 8 November, 1863, for gallant service at the battle of Rappahannock Station, Virginia During the Wilderness campaign of 1864 he bore an active part, especially at Spottsylvania, where he won the brevet of lieutenant-colonel, United States A., 10 May, 1864, and was wounded while leading the assaulting column of twelve regiments of his corps. For this he was appointed on the spot a brigadier-general of volunteers, 12 May, 1864. He was present during the siege of Petersburg, in the defence of the capital in July, 1864, and in the Shenandoah campaign, where, while commanding a division of infantry at the battle of the Opequan, he was severely wounded. On 19 September, 1864, he was brevetted colonel, United States of America, for gallant and meritorious services at Winchester, Virginia, 19 October, 1864, and also received the brevet of major-general of volunteers. He was in command of the 4th cavalry division under General James H. Wilson during the closing operations in Alabama and Georgia. He became captain in the 5th regiment of artillery on 22 February, 1865, was brevetted brigadier-general, United States army, on 13 March, 1865, for gallant service at Selma, Alabama, and also received the brevet of major-general, United States army, for services in the field during the civil war. He was in command of the 1st cavalry division in the District of East Tennessee in July and August, 1865, and of the District of Colorado from 22 August, 1865, till 30 April, 1866, when he was mustered out of the volunteer service. In the reorganization he became lieutenant-colonel, 25th infantry, 28 July, 1866. He had employment in the intervals of active service in preparing an original system of tactics for the use of the military forces of the government, and in 1867 his sys-tern for infantry was adopted. He was commandant of cadets at the United States military academy in 1870-'5, and member of a "board to assimilate the tactics" in 1873, when his system, modified for artillery and cavalry, was also accepted. General Upton was sent on a tour of inspection of the armies of Europe and Asia in 1875-'7, and on his return was assigned to the artillery-school at Fort Monroe, and wrote his official report, which was published by the government in 1878. He became colonel of the 4th artillery in 1880, and soon afterward joined his regiment at the Presidio, San Francisco, California His mind became affected, and he committed suicide. In his last days he was engaged in tactical studies and in writing a work on " The Military Policy of the United States," which is being prepared for publication by General James H. Wilson. He published "A New System of Infantry Tactics" (New York, 1867 ; 2d ed., 1874) ; "Tactics for Non-Military Bodies" (1870) ; and "The Armies of Asia and Europe" (1878). See "Life and Letters of Major-General Emory Upton," by Peter S. Michie (New York, 1885).

Start your search on Emory Upton.