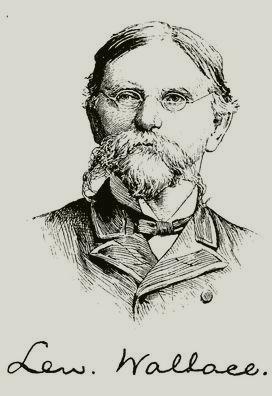 WALLACE, David, congressman, born in Lancaster county, Pennsylvania, 4 April, 1799; died in Indianapolis, Indiana, 3 September, 1859. He removed with his father's family to Brookville, Indiana, in 1817, was graduated at the United States military academy in 1821, and was assistant professor of mathematics there for two years, but resigned from the army, studied law, and established a lucrative practice in Franklin county, Indiana. He served several terms in the legislature, was a member of the Constitutional convention, lieutenant-governor in 1831-'4, and governor in 1837-'40. During that service he was active as an advocate of internal improvements and in establishing a school system. He was chosen to congress as a Whig in 1840, served one term, and, as a member of the committee on commerce, gave the casting-vote in favor of an appropriation to develop Samuel F. B. Norse's magnetic telegraph, which vote cost him his re-election. He returned to practice in 1842, and from 1856 until his death was judge of the Marion county court of common pleas. He was a popular political speaker and a laborious and impartial jurist.--His son, Lewis, soldier, born in Brookville, Franklin County, Indiana, 10 April, 1827, received a common-school education, and at the beginning of the Mexican war was a law-student in Indiana. At the call for volunteers he entered the army as a 1st lieutenant in company H, 1st Indiana infantry. He resumed his profession in 1848, which he practised in Covington and subsequently in Crawfordsville, Indiana, and served four years in the state senate. At the beginning of the civil war he was appointed adjutant-general of Indiana, soon afterward becoming colonel of the 11th Indiana volunteers, with which he served in West Virginia, participating in the capture of Romney and the ejection of the enemy from Harper's Ferry. He became brigadier-general of volunteers, 3 September, 1861, led a division and the centre of the Union lines at the capture of Fort Donelson, and displayed such ability that his commission of major-general of volunteers followed on 21 March, 1862. The day before the battle of Shiloh, his division was placed on the north side of Snake creek, on a road leading from Savannah or Crump's landing, to Purdy. He was ordered by General Grant, on the morning of 6 April (the first day of the battle), to cross the creek and come up to General William T. Sherman's right, which covered the bridge over that stream, that general depending on him for support; but, he lost his way, and did not arrive until the night. He rendered efficient service in the second day's fight, and in the subsequent advance on Corinth. In November, 1862, ha was president of the court of inquiry on the military conduct of General Don Carlos Buell in the operations in Tennessee and Kentucky. In 1863 he prepared the defences of Cincinnati, which he saved from capture by General Edmund Kirby Smith, and was subsequently assigned to the command of the middle department and the 8th army corps, with headquarters in Baltimore, Maryland With 5,800 men ha intercepted the march of General Jubal A. Early with 28,000 men on Washington, D. C., and on 9 July, 1864, fought the battle of the Monocacy. Although he was defeated, he gained sufficient time to enable General Grant to send re-enforcements to the capital from City Point. By order of General Henry W. Halleck, he was removed from his command, and superseded by General Edward O. C. Ord; but when General Grant learned the particulars of the action, ha immediately reinstated Wallace, and in his official report in 1865 says:" On 6 July the enemy (Early) occupied Hagerstown, moving a strong column toward Frederick city. General Wallace, with Ricketts's division and his own command, the latter new and mostly undisciplined troops, pushed out from Baltimore with great promptness and met the enemy in force on the Mo-nocacy, near the crossing of the railroad bridge. His force was not sufficient to insure success, but he fought the enemy nevertheless, and, although it re-suited in a defeat to our arms, yet he detained the enemy and thereby served to enable Wright to reach Washington before him." Returning to his command, General Wallace was second member of the court that tried the assassins of President Lincoln, and president of that which tried and convicted Captain Henry Wirz, commandant of Andersonville prison. General Wallace was mustered out of volunteer service in 1865, returned to the practice of law in Crawfordsville, was governor of Utah in 1878-'81, and in 1881 became United States minister to Turkey, serving till 1885, when he again resumed practice in Crawfordsville. He has lectured extensively in this country, and is the author of two successful novels, entitled "The Fair God," a story of the conquest of Mexico (Boston, 1873), "Ben-Hur, a Tale of the Christ," of which 290,000 copies have been sold (New York, 1880); a "Life of Benjamin Harrison" (1888) ; mid "The Boyhood of Christ " (1888).--His wife, Susan Arnold Elston, author, born in Crawfordsville, Indiana, 25 December, 1830, was educated there, and married General Wallace in 1852. Her maiden name was Elston. She has written many articles for newspapers and magazines, her short poem, " The Patter of Little Feet," attaining wide popularity. Her other publications are " The Storied Sea "(Boston, 1884) ; "Ginevra, or the Old Oak Chest" (New York, 1887) ; the "Land of the Pueblos," with other papers (1888); and "The Repose in Egypt" (1888).

Start your search on David Wallace.