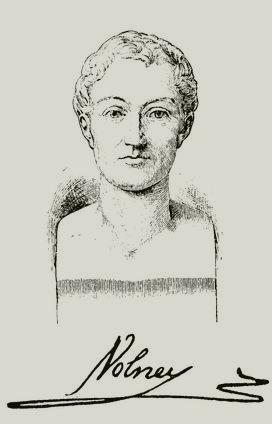 VOLNEY, Constantin Francois Chasseboeuf Boisgirais, Count de, French author, born in Craon, Maine-et-Loire, 3 February, 1757; died in Paris, 25 April, 1820. He was the son of Francois Chasseboeuf, a barrister of Craon, and was known until the age of twenty-five by the name of Boisgirais, but in 1782 he adopted that of Volney. After receiving his education at the colleges of Ancenis and Angers he was given his inheritance at the age of seventeen. He then went to Paris, where he studied medicine, philosophy, and chronology, and became a frequenter of the philosophical salons of Baron Holbach and Madame Helvetius, where he made the acquaintance of Voltaire, Diderot, D'Alembert, and Benjamin Franklin, with whom he maintained a long correspondence. After travelling in the East and writing accounts of his journeys, he found ed in 1788, at Rennes, the journal " La Sentinelle, was elected to the states general in ---1789, and in 1792 accompanied Pozzo-di-Borgo to Corsica. Being driven away by the revolution, he returned to France and published "La loi naturelle " (Paris, 1793), in which he advocated those theories by which he is now best known. During the reign of terror he was imprisoned for ten months, and on his release in 1794 he became professor of history in the Normal college at Paris. That same year he dissuaded Bonaparte from entering the Russian service, and obtained his reinstatement in the French army. In 1795 he came to the United States with the intention of settling in this country, and was welcomed by George Washington. He visited Pennsylvania, Virginia, Kentucky, and Louisiana, engaged in a controversy with John Adams concerning the latter's work on the constitution of the United States, and afterward answered Dr. Joseph Priestley, who had attacked Volney's infidel theories. Volney's letter was published in English (Philadelphia, 1797). While in this country Volney predicted, day after day, the operations of Bonaparte's campaign in Italy, pointing out the places where the Austrians were to be defeated. This astonished every one, while many looked on Volney as a French general in disguise. Washington asked Volney for an explanation, and he replied: "In 1792 I met at Marseilles and in Corsica a young lieutenant of artillery, and, being much struck by his conversation, invited him to my house. I was soon satisfied that he was a man of extraordinary genius .... The conversation fell on the war. Bonaparte developed a whole plan of operations to be pursued either in Italy or in Germany. I took down his words, and he now follows the plan of campaign that he explained to me years before." Volney showed his notes to Washington, who became also convinced of the great future of the new commander. He returned to Paris early in 1799, refused, after the coup d'etat, to be consul with Bonaparte or secretary of the interior, and was created senator. He was made commander of the Legion of honor in 1804, count of the empire in 1808, and a peer of France by Louis XVIII. in 1814. Volney, who was a member of the French institute after 1800 and of the Academie Francaise after 1803, founded the Volney prize of $240 to be awarded every year by the academy to the author of the best work on the foundation of the study of language. He had intended to write his impressions of the United States and a work on democratic institutions as they are understood here, but he was dissuaded on political and private considerations, among them being his friendship for Franklin and his respect for Washington, whom he did not care to criticise, but he wrote "Tableau du climat et du sol des Etats-Unis d'Amerique" (2 vols., Paris, 1803; English translation by Charles Brockden Brown, Philadelphia, 1804). His other works include "Sur la chronologic d'Herodote" (Paris, 1781)" "Voyage en Egypte et en Syrie" (Paris, 1787; revised ed., 1822)" " Considerations sur la guerre des Turcs et des Russes" (London, 1788);" Chronologic des douze sidcles antrieurs au passage de Xerxes en Grdee" (Paris, 1790); "Les ruines, meditations sur les revolutions des empires" (Geneva, 1791), a philosophical work that gave Volney a great reputation" "Precis de l'etat actuel de la Corse" (1793); "Legons d'histoire ancienne" (1799) ; "Recherches nouvelles sur l'histoire ancienne" (3 vols., 1814); " L'alphabet Europeen applique aux langues Asiatiques" (1819) ; " Histoire de Samuel, inventeur du saere des rois" (1819)" and "Discours sur l'etude philosophique des langues" (1820). Adolphe Bossange edited '" (Euvres compldtes de Volney," with a biography (8 vols., Paris, 1820-'6).