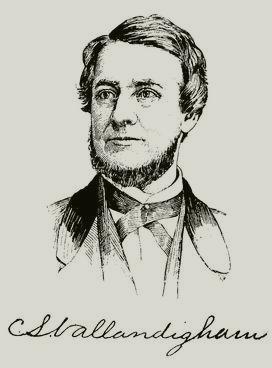 VALLANDIGHAM, Clement Laird (val-lan'-de-gain), politician, born in New Lisbon, Columbiana County, Ohio, 29 July, 1820; died in Lebanon, Warren County, Ohio, 17 June, 1871. He received an academical education, and from 1838 till 1840 taught at Snow Hill, Maryland. In 1840 he returned to Ohio, and in 1842 was admitted to the bar. In 1845-'6 he was a member of the Ohio legislature, and from 1847 till 1849 edited the Dayton "Empire." He belonged to the extreme state-rights wing of the Democratic party, He was a member of the National Democratic convention in 1856. In 1857 he was a candidate for congress against Lewis D. Campbell, and, though declared defeated, contested the seat and won it, serving from 25 May, 1858, till 3 March, 1863. During the 37th congress he became conspicuous for his bold utterances against the acts of the administration in the conduct of the war, and on 5 December, 1862, offered a series of resolutions in which he declared "that, as the war was originally waged for the purpose of defending and maintaining the supremacy of the constitution and the preservation of the Union, ... whosoever should attempt to pervert the same to a war of subjugation, and for overthrowing or interfering with the rights of the states, and to abolish slavery, would be guilty of a crime against the constitution and the Union." These resolutions were laid on the table by a vote of 79 to 50. On 14 January following, Mr. Vallandigham spoke to the resolutions of Mr. Wright, of Pennsylvania, defined his position on the war question, and said : "A war for Union ! Was the Union thus made ? Was it ever thus preserved? History will record that after nearly six thousand years of folly and wickedness in every form and administration of government, theocratic, democratic, monarchic, oligarchic, despotic, and mixed, it was reserved to American statesmanship in the 19th century of the Christian era to try the grand experiment, on a scale the most costly and gigantic in its proportions, of creating love by force, and developing fraternal affection by war; and history will record, too, on the same page, the utter, disastrous, and most bloody failure of the experiment." After his term in congress expired, Mr. Vallandigham returned to Ohio and made numerous speeches, in which he attacked the administration with great violence and bitterness. Gem Ambrose E. Burnside, then commander of the Department of the Ohio, regarded these demonstrations of Mr. Vallandigham and his friends as intended to afford aid and comfort to the enemy; and, as the city of Cincinnati, as well as southern Ohio and the adjacent states, was in some peril from the raids of the Confederates, he deemed it his duty to suppress these demonstrations, and accordingly issued an order declaring that persons within the lines that were found committing certain specified acts for the benefit, of the enemy should be tried as spies and traitors, and also said that the habit of expressing sympathy for the enemy would no longer be tolerated in the department. Mr. Vallandigham replied to this order on 1 May in a defiant speech, and Gen Burnside ordered his arrest. He was taken to Cincinnati, and, though he issued an appeal to his adherents, was tried by court-martial, convicted, and sentenced to close confinement during the war. President. Lincoln changed the sentence to a banishment across the lines. This affair occasioned much discussion both in public assemblies and in the press. Without exception, the Democratic journals denounced the whole transaction. The organs of the administration took different views, some maintaining that the necessities of the case justified the measure, while others deprecated the action of General Burnside and the military commission. Not liking his reception by the leaders of the Confederacy--to whom he had given the assurance that they would succeed if their armies could only hold out till another election, when the Democrats would sweep the Republican administration out of power, and make peace--Mr. Vallandigham made his way to Bermuda, and thence to Canada, where he remained for some time. While thus in exile, he was nominated for governor by the Democratic party in Ohio, but was defeated, his rival, John Brough, having a majority of more than 100,000. The government made no objection to Mr. Vallandigham's return to Ohio, and he was a member of the Democratic national convention at Chicago in 1864, and brought about the nomination of George B. McClellan and George II. Pendleton. He was also a delegate to the National Democratic convention in 1868. His death was caused by the accidental discharge of a pistol in his own hand, in the court-room, with which he was illustrating his theory of the manner in which a homicide had taken place.