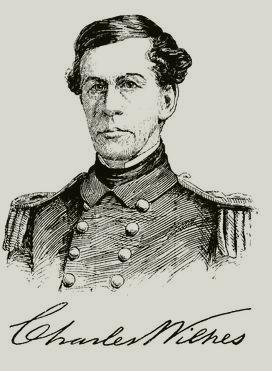 WILKES, Charles, naval officer, born in New York city, 3 April, ]798; died in Washington, D. C., 8 February, 1877. He entered the navy as a midshipman, 1 January. 1818, and was promoted to lieutenant, 28 April, 1826. He was appointed to the department of charts and instruments in 1830, and was the first in the United States to set up fixed astronomical instruments and observe with them. On 18 August, 1838, he sailed from Norfolk, Virginia, in command of a squadron of five vessels and a store-ship, to explore the southern seas. He visited Madeira., the Cape Verd islands, Rio de Janeiro, Tierra del Fuego, Valparaiso, Callao, the Paumotou group, Tahiti, the Samoan group (which he surveyed and explored), Wallis island, and Sydney in New South Wales. He left Sydney in December, 1839, and discovered what he thought to be an Antarctic continent, sailing along vast ice-fields for several weeks. In 1840 he thoroughly explored the Feejee group, and visited the Hawaiian islands, where he measured intensity of gravity by means of the pendulum on the summit of Mauna Loa. In 1841 he visited the northwestern coast of America and Columbia and Sacramento rivers, and on 1 November set sail from San Francisco, visited Manila, Sooloo, Borneo, Singapore, the Cape of Good Hope, and St. Helena, and cast anchor at New York on 10 June, 1842. Charges preferred against him by some of his officers were investigated by a court-martial, and he was acquitted of all except illegally punishing some of his crew, for which he was reprimanded. He served on the coast survey in 1842-'3, was promoted to commander, 13 July, 1843, and employed in connection with the report on the exploring expedition at Washington in 1844-'61. He was commissioned a captain, 14 September, 1855, and when the civil war opened was placed in command of the steamer "San Jacinto" in 1861 and sailed in pursuit of the Confederate privateer "Sumter." On 8 November, 1861, he intercepted at sea the English mail-steamer " Trent," bound from Havana to St. Thomas, Wisconsin, and sent Lieutenant Donald M. Fairfax on board to bring off the Confederate commissioners, John Slidell and James M. Mason, with their secretaries. The officials were removed to the "San Jacinto," in which they were taken to Fort Warren, in Boston harbor. The navy department gave Captain Wilkes an emphatic commendation; congress passed a resolution of thanks, and his act caused great rejoicing throughout the north, where he was the hero of the hour. But on the demand of the British government that Mason and Slidell should be given up, Sec. Seward complied, saying in his despatch that, although the commissioners and their papers were contraband of war, and therefore Wilkes was right in capturing them, he should have taken the "Trent" into port as a prize for adjudication. As he had failed to do so, and had constituted himself a judge in the matter, to approve his act would be to sanction the "right of search," which had always been denied by the United States government. The prisoners were therefore released. In 1862 Wilkes commanded the James river flotilla, and shelled City Point. He was promoted to commodore, 16 July, 1862, and took charge of a special squadron in the West Indies. He was placed on the retired list because of age, 25 June, 1864, and promoted to rear-admiral on the retired list, 25 July, 1866. For his services to science as an explorer he received a gold medal from the Geographical society of London. The reports of the Wilkes exploring expedition were to consist of twenty-eight quarto volumes, but nine of these were not completed. Of those that were published, Captain Wilkes was the author of the " Narrative" of the expedition (6 vols., 4to, also 5 vols., 8vo, Philadelphia, 1845; abridged ed., New York, 1851), and the volumes on " Meteorology" and "Hydrography." Admiral Wilkes was also the author of " Western America, including California and Oregon" (Philadelphia, 1849), and "Theory of the Winds" (New York, 1856).

Start your search on Charles Wilkes.