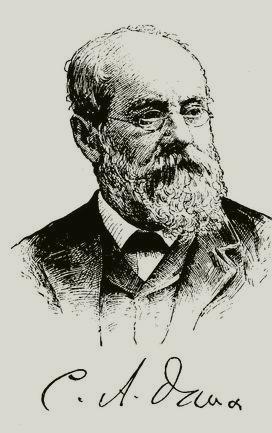 DANA, Charles Anderson, editor, born in Hinsdale, New Hampshire, 8 August 1819. He is a descendant of Jacob, eldest son of Richard Dana, progenitor of most of those who bear the name in the United States. His boyhood was spent in Buffalo, New York, where he worked in a store until he was eighteen years old. At that age he first studied the Latin grammar, and prepared himself for College, entering Harvard in 1839, but after two years a serious trouble with his eyesight compelled him to leave. He received an honorable dismissal, and was afterward given his bachelor's and master's degrees. In 1842 he became a member of the Brook Farm association for agriculture and education, being associated with George and Sophia Ripley, George William Curtis, Nathaniel Hawthorne, Theodore Parker, William Henry Channing, John Sullivan Dwight, Margaret Fuller, and other philosophers more or less directly concerned in the remarkable attempt to realize at Roxbury a high ideal of social and intellectual life. One of the survivors of Brook Farm speaks of Mr. Dana as the only man of affairs connected with that Unitarian, humanitarian, and socialistic experiment. His earliest newspaper experience was gained in the management of the "Harbinger," which was devoted to social reform and general literature. After about two years of editorial work on Elizur Wright's Boston "Chronotype," a daily newspaper, Mr. Dana joined the staff of the New York "Tribune" in 1847. The next year he spent eight months in Europe, and after his return he became one of the proprietors and the managing editor of the " Tribune," a post which he held until 1 April 1862.

The extraordinary influence and circulation attained by that newspaper during the ten years preceding the civil war was in a degree due to the development of Mr. Dana's genius for journalism. This remark applies not only to the making of the "Tribune" as a newspaper, but also to the management of its staff of writers, and to the steadiness of its policy as the leading organ of anti-slavery sentiment. The great struggle of the "Tribune" under Greeley and Dana was not so much for the overthrow of slavery where it already existed as against the further spread of the institution over unoccupied territory, and the acquisition of slave-holding countries outside of the Union. It was not less firm in its resistance of the designs of the slave-holding interest than wise in its attitude toward the extremists and impracticables at the north. In the " Tribune's" opposition to the attempt to break down the Missouri compromise and to carry slavery into Kansas and Nebraska, and in the development and organization of that popular sentiment which gave birth to the Republican Party and led to the election of Abraham Lincoln in 1860, Mr. Dana bore no unimportant part. Writing of the political situation in 1854, Henry Wilson says, in his "Rise and Fall of the Slave Power": "At the outset, Mr. Greeley was hopeless and seemed disinclined to enter the contest. He told his associates that he would not restrain them, but, as for himself, he had no heart for the strife. They were more hopeful; and Richard Hildreth, the historian, Charles A. Dana, the veteran journalist, James S. Pike, and other able writers, opened and continued a powerful opposition in its columns, and did very much to rally and reassure the friends of freedom and to nerve them for the fight."

In 1861 Mr. Dana went to Albany to advance the cause of Mr. Greeley as a candidate for the U. S. Senate, and nearly succeeded in nominating him. The caucus was about equally divided between Mr. Greeley's friends and those of Mr. Evarts, while Ira Harris had a few votes that held the balance of power, and, at the instigation of Thurlow Weed, the supporters of Mr. Evarts went over to Judge Harris. During the first year of the war the ideas of Mr. Greeley and those of Mr. Dana in regard to the proper conduct of military operations were somewhat at variance; and this disagreement resulted in the resignation of Mr. Dana, after fifteen years' service on the "Tribune."

Secretary Stanton at once employed him in special work of importance for the war department, and in 1863 was appointed assistant secretary of war, which office he held until after until surrender of Lee. His duties as the representative of the civil authority at the scene of military operations brought him into close personal relations with Mr. Stanton and Mr. Lincoln, who were accustomed to depend much upon his accurate perception and just estimates of men and measures for information of the actual state of affairs at the front. At the time when General Grant's character and probable usefulness were unknown quantities, Mr. Dana's confidence in Grant's military ability probably did much to defeat the powerful effort then making to break down the rising commander. Of this critical period General Sherman remarks in his "Memoirs ": "One day early in April 1863, I was up at Grant's headquarters [at Vicksburg], and we talked over all these things with absolute freedom. Charles A. Dana, assistant secretary of war, was there, and Wilson, Rawlins, Frank Blair, McPherson, etc. We all knew, what was notorious, that General McClernand was intriguing against Geeneral Grant, in hopes to regain command of the whole expedition, and that others were raising clamor against Grant in the newspapers of the north. Even Mr. Lincoln and General Halieck seemed to be shaken; but at no instant did we (his personal friends) slacken in our loyalty to him." Mr. Dana was in the saddle at the front much of the time during the campaigns of northern Mississippi and Vicksburg, the rescue of Chattanooga, and the marches and battles of Virginia in 1864 and 1865. After the war his services were sought by the proprietors of the Chicago " Republican," a new daily, which failed through causes not within the editor's control.

Returning to New York, he organized in 1867 the stock company that now owns the "Sun" newspaper, and became its editor. The first number of the " Sun" issued by Mr. Dana appeared on 27 January 1868, and for nearly twenty years he has been actively and continuously engaged in the management of that successful journal, and solely responsible for its conduct. He made the "Sun" a democratic newspaper, independent and outspoken in the expression of its opinions respecting the affairs of either party. His criticisms of civil maladministration during General Grant's terms as president led to a notable attempt on the part of that administration, in July 1873, to take him from New York on a charge of libel, to be tried without a jury in a Washington police court. Application was made to the U. S. district court in New York for a warrant of removal; but in a memorable decision Judge Blatchford, now a justice of the Supreme Court of the United States, refused the warrant, holding the proposed form of trial to be unconstitutional.

Perhaps to a greater extent than in the case of any other conspicuous journalist, Mr. Dana's personality is identified in the public mind with the newspaper that he edits. He has recorded no theories of journalism other than those of common sense and human interest. He is impatient of prolixity, cant, and the conventional standards of news importance. Mr. Dana's first book was a volume of stories translated from the German, entitled "The Black Ant" (New York and Leipsic, 1848). In 1855 he planned and edited, with George Ripley, the "New American Cyclopaedia." The original edition was completed in 1863. It has since been thoroughly revised and issued in a new edition under the title of " The American Cyclopaedia" (16 vols., New York, 1873-'6). With General James It. Wilson he wrote a "Life of Ulysses S. Grant" (Springfield, 1868). His " Household Book of Poetry, a collection of the best minor poems of the English language," was first published in 1857, and has passed through many editions, the latest, thoroughly revised, being that of 1884. He has also edited, with Rossiter Johnson, "Fifty Perfect Poems " (New York, 1883).