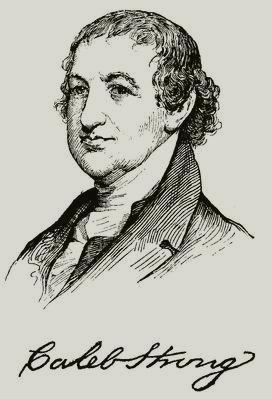 STRONG, Caleb, senator, born in Northampton, "Mass., 9 January, 1745 ; died there, 7 November, 1819. He was fourth in descent from John, founder of the family, who came to this country from Taunton, England, in 1630, and finally settled in Northampton, Massachusetts After graduation at Harvard in 1764, he studied law, and was admitted to the bar in 1772. During the Revolution he was a member of the general court and the Northampton committee of safety, and from 1776 till 1800 he was county attorney. He was sent to the State constitutional convention in 1779, where he aided in drawing up the constitution, and to the state council in 1780, and from the latter year till 1789 he was in the state senate. In 1781 he declined a seat on the supreme bench. In 1787 he was chosen to the convention that framed the constitution of the United States, and, although illness in his family compelled him to return before it was completed, he exerted himself in the state convention to procure its ratification. In 1789 he was elected one of the first United States senators from Massachusetts, and he served till his resignation in 1796. He was governor of his state from 1800 till 1807, and again from 1812 till 1816. As a Federalist, he earnestly opposed the war of 1812, and when requisition was made upon him for troops, he denied the right of the president on constitutional grounds. He cialmed that, as governor of the state, he should De the judge of the exigency in which the constitution allowed the president to call out the militia, and that, when this was done, the state troops should be commanded by their own officers. The state supreme court, being called upon for an opinion on these points, sustained the governor. But when the administration withdrew nearly all the National troops from the coast of Massachusetts, leaving it defenceless, he was active in adopting measures for the safety of the state. See his "Life" by Alden Bradford (Boston, 1820) ; his "Speeches, and other Papers, 1800-1807" (Newburyport, Massachusetts, 1808); and." The Strong Family," by Benjamin W. Dwight (2 vols., Albany, 1871).

Start your search on Caleb Strong.