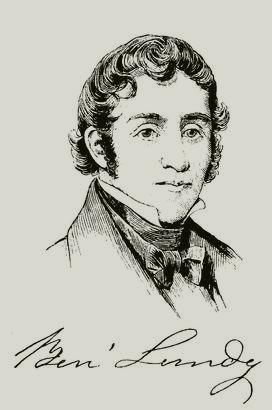 LUNDY, Benjamin, philanthropist, born in Hard-wick, Warren County, New Jersey, 4 January, 1789; died in Lowell, La Salle County, Illinois, 22 August, 1839. His parents were members of the Society of Friends. When he was about nineteen years of age he removed to Wheeling, Virginia, where he remained for four years, working the first eighteen months as an apprentice to a saddler. While there his attention was first directed to the evils of slavery, and determined his future course as an Abolitionist. On leaving Wheeling he went to Mt. Pleasant, Ohio, and then to St. Clairsville in that state, where, in 1815, he originated an anti-slavery association, called the " Union humane society," and wrote an appeal on the subject of slavery. Soon afterward he became a contributor of anti-slavery articles to the "Philanthropist" newspaper, published at Nt. Pleasant. In the autumn of 1819 he removed to St.

Louis, Missouri, at the time that the Missouri question was attracting universal attention, and devoted himself to an exposition of the evils of slavery in the newspapers of that state and Illinois Returning to Mt Pleasant, he began in January, 1812, the publication of the "Genius of Universal Emancipation," a monthly, the office of which was soon removed to Jonesborough, Tennessee, and thenee to Baitimore in 1824, when it became a weekly. In the latter part of 1825 Mr. Lundy visited Hayti to make arrangements with the government of that island for the settlement of such freed slaves as might be sent thither. In 1828 he visited the eastern states, where he lectured and formed the acquaintance of William Lloyd Garrison, with whom he afterward became associated in editing his journal. In the winter of 1828-'9 he was assaulted for an alleged libel and nearly killed in Baltimore by a slave-dealer named Austin Wool-folk. Lundy was indirectly censured by the court and compelled to remove his paper to Washington, and finally to Philadelphia, where he gave it the name of " The National Inquirer," and finally it merged into "The Pennsylvania Freeman." In 1829 he went a second time to Hayti, and took with him several slaves that had been emancipated for that purpose. In the winter of 1830 he visited the Wilberforce colony of fugitive slaves in Canada, and then went to Texas to provide a similar asylum under the Mexican flag, renewing his visit in 1833, but was baffled by the events that led to the annexation of Texas. In 1838 his property was burned by the pro-slavery mob that fired Pennsylvania Hall, Philadelphia. In the winter of 1838-'9 he removed to Lowell, La Salle County, Illinois, with the intention of publishing the "Genius" there, but his design was frustrated by his death. He was the first to establish anti-slavery periodicals and to deliver anti-slavery lectures, and probably the first to induce the formation of societies for the encouragement of the produce of free labor. See "The Life, Travels, and Opinions of Benjamin Lundy," by Thomas Earl (Philadelphia, 1847).

Start your search on Benjamin Lundy.