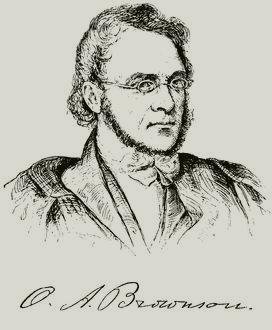 BROWNSON, 0restes Augustus, author, born in Stockbridge, Vermont, 16 September, 1803; died in Detroit, Michigan, 17 April, 1876. His father died, leaving the family in poverty, and from his seventh till his fourteenth year he lived with elderly relatives at Royalton, who reared him in the simple, rigorous discipline of Puritanism. After this he removed to Saratoga, and there earned enough money to enter an academy at Ballston while there he united with the Presbyterian church in 1822 ; but he afterward changed his views, and became in 1825 a Universalism minister. He preached in Vermont and New York, conducted the " Gospel Advocate," the leading Universalism organ, was afterward editor of the "Philanthropist," and wrote for religious periodicals in support of his new belief. Making the acquaintance of Robert Owen, he was fascinated by schemes of social reform, and in 1828 was prominent in the formation of the workingmen's party in New York, the design of which was to relieve the poorer classes by political organization ; but he presently despaired of the effectiveness of this movement. Afterward the writings of Dr. Channing drew his attention to the Unitarians, and in 1832 he became pastor of a congregation of that denomination. In 1836 he organized in Boston the Society for Christian Union and Progress of which he retained the pastorate till he ceased preaching" in 1843. Mr. Brownson became a popular leader in the Democratic Party, a vigorous and acrimonious opponent of the Whigs, whom he regarded as an aristocratic party, and a favorite stump-speaker, especially in Massachusetts. He was one of the founders of the original loco-foco party in New York, and in his review he warmly supported Van Buren, who, when president, gave him the appointment of steward of Chelsea hospital. He was independent in his political views, and troublesome to party leaders. When the democrats and free-soilers of Massachusetts agreed on a new constitution, he, with other independents, secured its rejection and helped to secure the triumph of the Whigs, Immediately after removing to Boston he published his "New Views of Christian Society and the Church" (Boston, 1836), remarkable for its protest against Protestantism. Articles on the eclectic philosophy, published in the " Christian Examiner," in 18.37, gave him a reputation as a philosopher. In 1838 he established the " Boston Quarterly Review," of which he was proprietor, and almost sole writer, during the five years of its separate existence, and to which he contributed largely during the first year after it was merged in the " Democratic Review," of New York. It was designed not to support any definite doctrine, but to awaken thought on great subjects and lead the way to radical changes. Mr. O'Sullivan, proprietor of the " Review" when he purchased the subscription-list of the "Quarterly," entered into a contract to allow Dr. Brownson to print what he pleased. His articles were often opposed to the policy of the party, and cost the "Democratic Review" many subscribers. He published in 1840 " Charles Elwood, or the Infidel Converted," an autobiographic philosophical novel, which passed through several editions; but, because the author changed his religious views, he refused to have more than one edition issued in the United States. In 1844 he entered the Roman Catholic communion, to which he afterward remained attached. The method adopted in his philosophical system is the distinction between intuition and indirect or reflex knowledge. His review was continued under the title of "Brownson's Quarterly Review," but was afterward transferred to New York. He came into collision with the authorities of his church on certain questions, which he treated from the standpoint of what was called liberal Catholicity. The writings of Cousin, Leroux, and Gioberti had always had much influence over him, and certain theories of those philosophers were so much insisted on in the pages of the "Review" that the question of Dr. Brownson's orthodoxy was referred to Rome, and Cardinal Franzelin was deputed by the pope to examine the matter. This great theologian found nothing worthy of censure in the opinions of Dr. Brownson, but recommended him to be more moderate in his language. However, the indignation that his views on certain points aroused among the clergy, combined with domestic trials, impaired health, and his anxiety for the safety of the union, to whose cause he had given two sons, had such a depressing effect on him that he discontinued the "Review" in 1864. When the syllabus was published in the following year he wrote strongly in its defense in the "Catholic World" and "Tablet," and was accused of being too rigorous on some points of Catholic doctrine, while he was lax on others. He was offered a chair in the new University in Dublin, but preferred to continue his labors in his native country. He revived his " Review" in 1873, but after two years discontinued it again, partly because he wished to live in Detroit with his son, and partly because he disliked the contests that certain newspapers tried to force upon him. " Brownson's Review" was the first American periodical reprinted in England, where it had a large circulation. The later publications of Mr. Brownson's are: "Essays and Reviews" (New York, 1852); " The Spirit-Rapper, an Autobiography" (Boston, 1854); "The Convert, or Leaves from my Experience" (New York, 1857); " The American Republic, its Constitution, Tendencies, and Destiny," a work treating of the ethics of politics (1865); "Conversation on Liberalism and the Church" (1870). Translations of several of his works and essays have appeared in Europe. A collected edition of his works has been published in nineteen volumes.