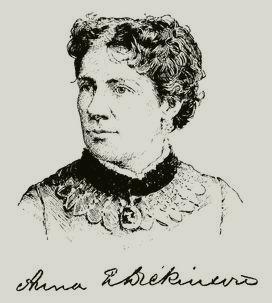 DICKINSON, Anna Elizabeth, orator, born in Philadelphia, Pennsylvania, 28 October 1842. Her father died when she was two years old, leaving her in poverty, and she was educated in the free schools of the Society of Friends, of which her parents were members. Her early days were a continuous struggle against adverse circumstances, but she read eagerly, devoting all her earnings to the purchase of books. She wrote an article on slavery for the "Liberator" when only fourteen years old, and made her first appearance as a public speaker in 1857, at meetings for discussion held by a body calling themselves "Progressive Friends," chiefly interested in the antislavery movement. A sneering and insolent tirade against women, by a person prominent at these meetings, called from the spirited girl a withering reply, her maiden speech. From this time she spoke frequently, chiefly on temperance and slavery. She taught school in Berks County, Pennsylvania, in 1859'60, and was employed in the U. S. mint in Philadelphia from April to December 1861, but was dismissed for saying, in a speech in West Chester, that the battle of Ba11's Bluff "was lost, not through ignorance and incompetence, but through the treason of the commanding general" (McClellan). She then made lecturing her profession, speaking chiefly on political subjects. William Lloyd Garrison heard one of her antislavery speeches in an annual meeting of the Progressive Friends, h ehl at Kennett, Chester County, Pennsylvania, with great delight, and on his return to Boston spoke of the "girl orator" in such terms that she was invited to speak in the fraternity course at Music Hall, Boston, in 1862, and chose for her subject the " National Crisis." From Boston she went to New Hampshire, at the request of the Republican state committee, to speak in the gubernatorial canvass, and thence was called to Connecticut. On election night a reception was tendered her at Hartford, and immediately thereafter she was invited to speak in Cooper institute by the Union League of New York, and shortly afterward in the Academy of Music, Philadelphia, by the Union League of that City. From this time to the end of the civil war she spoke on war issues. In the autumn of 1863 she was asked by the Republican state committee of Pennsylvania to speak throughout the coal regions in the canvass to reelect Curtin, the male orators at the committee's command being afraid to trust them in a district that had recently been the scene of draft riots. Ohio offered her a large stun for her services, but she decided in favor of Pennsylvania. On 16 January 1864, at the request of prominent senators and representatives, she spoke in the capitol at Washington, giving the proceeds, over $1,000, to the Freedmen's relief society. She also spoke in camps and hospitals, and did much in aid of the national cause. After this her addresses were made chiefly from the lyceum platform. On the termination of the war she spoke on " Reconstruction " and on "Woman's Work and Wages." In 1869'70, after a visit to Utah, she lectured on " Whited Sepulchers." Later lectures, delivered in the northern and western states, were "Demagogues and Workingmen," " Joan of Arc," and " Between us be Truth," the last-named being delivered in 1873 in Pennsylvania and Missouri, where obnoxious bills on the. social evil were before the legislatures. In 1876 Miss Dickinson, contrary to the advice of many of her friends, left the lecture platform for the stage, making her first appearance in a play of her own, entitled " A Crown of Thorns." The critics did not favorably receive it, and Miss Dickinson afterward acted in Shakespeare's tragedies, still meeting with little success. "Aurelian" was written in 1878 for John McCullough, but was withdrawn by the author when the failing powers of the great tragedian made it apparent that he would be unable to appear in it. It has never been put upon the stage, but Miss Dickinson has given readings from it. She lectured on "Platform and Stage" in 1879, and in 1880 wrote "An American Girl " for Fanny Davenport, which was successful. Miss Dickinson's published works are "What Answer?" a novel (Boston, 1868); "A Paying Investment" (1876)" and "A Ragged Register of People, Places, and Opinions" (New York, 1879).