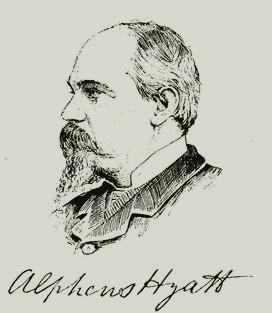 HYATT, Alpheus, naturalist, born in Washington, D. C., 5 April, 1838. He was educated at the Maryland military academy, at Yale college, and at the Lawrence scientific school of Harvard, where he was graduated in 1862. Subsequently he served during the civil war in the 47th Massachusetts volunteers, and attained the rank of captain. He then renewed his studies under Louis Agassiz, and in 1867 became a curator in the Essex institute. While holding this office in connection with Edward S. Morse, Alpheus S. Packard, Frederick W. Putnam, and the officers of the Essex institute, he founded the Peabody academy of science. Its museum was planned by these four naturalists, together they formed its first scientific staff, and in 1869 Mr. Hyatt was made one of its curators. He was also associated with these gentlemen in establishing the "American Naturalist," and was one of its original editors. In 1870 he was elected custodian and in 1881 curator of the Boston society of natural history. He has also charge of the fossil invertebrates in the Museum of comparative zoology at Cambridge, and since 1881 has held the professorship of zoology and paleontology in the Massachusetts institute of technology. Professor Hyatt also has a class in the Boston university, and in connection with the Society of natural history is manager of the Teachers' school of science, which was founded in 1870. A general laboratory of natural history was founded at Annisquam, Massachusetts, by the Woman's educational society of Boston, and Professor Hyatt is also in charge of this enterprise, the origin of which is due to him. He was elected a fellow of the American academy of arts and sciences in 1869, and in 1875 was made a member of the National academy of science. The American society of naturalists was organized in consequence of suggestions that were made by him, and at the first meeting in Springfield, Massachusetts, in 1883, he was elected its president. Professor Hyatt has devoted special attention to the lower forms of animal life. Among his important researches are "Observations on Polyzoa" (1866); " Fossil Cephalopods of the Museam of Comparative Zoology" (1872); "Revision of North American Peroferae" (1875-'7), which is the only work on North American commercial sponges, and is recognized throughout the world as an authority; "Genesis of Tertiary Species of Planorbis at Steinheim" (1880), giving the details of his study at Steinheim of the fossils, which were at that time regarded in Europe as the only positive demonstration of the theory of evolution; and " Genera of Fossil Cephalopoda" (1883), containing important contributions to the theory of evolution. "Larval Theory of the Origin of Cellular Tissue" (1884) contains his theory of the origin of sex. Besides the foregoing, Professor Hyatt has edited a series of "Guides for Science Teaching," and is himself the author of several of the series, including "About Pebbles," "Commercial and other Sponges," "Common Hydroids, Corals, and Echinoderms," "The Oyster, Clam, and other Common Mollusks," and "Worms and Crustaceans."

Start your search on Alpheus Hyatt.