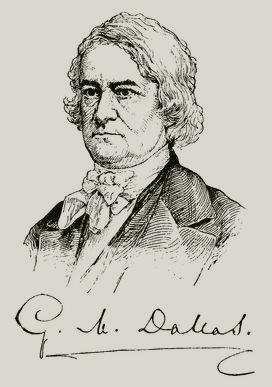 DALLAS, Alexander James, statesman, born in the Island of Jamaica, 21 June 1759; died in Trenton, New Jersey, 14 January 1817. He was the son of a Scottish physician who immigrated to Jamaica about 1750. The son was educated in Edinburgh and at Westminster under James Elphinston, the friend of Dr. Johnson, whose acquaintance and that of Dr. Franklin he made while a student. He then studied law in London, returned to Jamaica in 1780, and, upon the remarriage of his mother and his exclusion from the inheritance of his father's estate, removed in April 1783, to Philadelphia. He took the oath of allegiance to the common-wealth of Pennsylvania in June 1783, was admitted to the bar in July 1785, and a few years later was admitted to practice in the United States courts, and became eminently successful as a lawyer in Philadelphia. He wrote for periodicals, and was for a time editor of the "Columbian Magazine." In January 1791, he was appointed secretary of the commonwealth of Pennsylvania, and in December 1793, his commission was renewed. While in this office he prepared an edition of the laws of Pennsylvania, with notes. He also compiled four volumes of "Reports of Cases ruled and adjudged by the Courts of the United States and of Pennsylvania, before and since the Revolution " (Philadelphia, 1790-1807).

He accompanied an armed force to Pittsburgh, in the capacity of paymaster-general, in 1794. It e was again appointed secretary of state in December 1796, and held the office until Thomas Jefferson became president in 1801 and appointed him, as an ardent supporter of the Republican Party, U. S. district attorney for the eastern district of Pennsylvania, which office he held till 1814, when he was called into the cabinet as secretary of the treasury by President Madison. When he entered upon this office, 6 October 1814, the government was seriously embarrassed in its finances through the war with Great Britain, and the committee of ways and means in congress applied to Mr. Dallas for suggest, ions as to the best mode of raising money for the requirements of the government, and of sustaining the public credit. In a masterly report he showed that the money required could not be raised by taxation alone, but must be obtained in part by loans. He proposed for the purpose of raising a loan the establishment of a government bank. The house, in committee of the whole, reported in favor of the bank on 24 October 1814, and a bill was passed on 20 January 1815, but was vetoed by President Madison. Having been interrogated as to the probable effect of a large issue of treasury-notes, Secretary Dallas made a reply that had much influence in restoring public confidence and arousing the spirit of patriotism. On 3 April 1816, an act to incorporate a national bank was passed by congress and received the signature of the president. Mr. Dallas's administration of the treasury department was able and energetic. Treasury-notes, which were scarcely current when he assumed office, were sold at par, with interest added, a few months later. The bank had the effect of greatly improving the credit of the government.

After March 1815, he discharged the duties of secretary of war in addition to the direction of the treasury department, and superintended the reduction of the army consequent upon the restoration of peace. Having contributed, to the extent of his ability, to extricate the government from its financial difficulties, and having seen the United States bank firmly established, he retired from office in November 1816, and returned to the practice of law in Philadelphia, but died a few weeks afterward. Besides the works mentioned above and his treasury reports, he published "Features of Jay's Treaty" (Philadelphia, 1795); "Speeches on the Trial of Blount"; "Address to the Society of Constitutional Republicans" (1805); and " Exposition of the Causes and Character of the War of 1812-'15." He left unfinished a " History of Pennsylvania." The third edition of his "Reports of Cases," with notes by Thomas J. Wharton, appeared in Philadelphia in 1830.

--His son, Alexander James Dallas, naval officer, born in 1791 died in Callao bay, Peru, 3 June 1844, was appointed a midshipman on 22 November 1805, became a lieutenant on 13 June 1810, commander on 5 March 1817, and captain on 24 April 1828. He served under Rodgers on board the "President" in 1812, and afterward under Chauncey on Lake Ontario, and was with Porter in his cruise for the extermination of pirates in the West Indies.

--Another son, George Mifflin Dallas, statesman, born in Philadelphia, Pennsylvania, 10 July 1792; died there. 31 December 1864, was graduated with first-class honors at Princeton in 1810, and then studied law in his father's office, being admitted to the bar in 1813. The same year he received the appointment of private secretary to Albert Gallatin, and accompanied that gentleman on his mission to Russia, to negotiate a treaty of peace with England. On his return to this country, in the following year, he assisted his father for some months in his duties as secretary of the treasury, and then began the practice of law in New York City, and was solicitor of the U. S. bank. In 1817 he was appointed deputy attorney general for Philadelphia County. Taking an active part in politics, and supporting the candidacy of General Jackson for the presidency in 1824 and 1828, Mr. Dallas was in 1829 elected mayor, and, on the elevation of General Jackson to the presidency, in 1829 was appointed U. S. attorney for that district. He retained this office till 1831, when he was elected to the U. S. Senate in the place of Isaac D. Barnard, who had resigned. He took a prominent part in the debates of that body until the expiration of his term, in 1833, when he declined a re-election, returned to the practice of the law, and filled the office of attorney general of Pennsylvania from 1833 till 1835.

In 1837 President Van Buren appointed him minister to Russia, which post he retained till October 1839, when he was recalled, at his own request, and again resumed legal practice. George M. Dallas and James Buchanan were for many years rival leaders of the Democratic Party in Pennsylvania, and aspirants for the presidency of the United States. In May 1844, the democratic convention at Baltimore nominated him for vice-president of the United States on the ticket with James K. Polk for president. The democratic candidates were elected by an electoral vote of 170 out of 275. The questions of the time were the tariff and the annexation of Texas. Mr. Polk's election caused the admission of Texas to the Union just before the close of Mr. Tyler's term of office, but the subject of the tariff was left for the new administration. The appointment of his rival, Buchanan, as secretary of state, left Mr. Dallas without influence on the policy of the administration; but the He in the senate on the free-trade tariff of 1846, and its adoption by his casting vote, gave him prominence. The House of Representatives passed abandoning the protective policy, a bill that levied duties on imports for the purpose of revenue only, in 1846, but when it reached the senate that body was evenly divided, so that the decision rested with the vice-president. In giving his vote Mr. Dallas said that, though the bill was defective, he believed that proof had been furnished that a majority of the people desired a change, to a great extent, in principle, if not fundamentally; but in giving the casting vote for a low tariff he violated pledges made to the protectionists of Pennsylvania that had secured the vote of the state for his party in the presidential election. His term expired in 1849.

In 1856 Mr. Dallas succeeded Mr. Buchanan as minister to Great Britain, and continued in that post from 4 February 1856, until the appointment by President Lincoln of Charles F. Adams, who relieved him on 16 May 1861. At the very beginning of his diplomatic service in England he was called to act upon the Central American question, and the request made by the United States to the British government that Sir John Crampton, the British minister to the United States, should be recalled. Mr. Dallas managed these delicate questions in a conciliatory spirit, but without any sacrifice of national dignity, and both were settled amicably. At the close of his diplomatic career Mr. Dallas returned to private life and took no further part in public affairs except to express condemnation of secession. Many of his speeches were published, among them "An Essay on the Expediency of erecting any Monument to Washington except that involved in the Preservation of the Union" (1811); "A Vindication of President Monroe for authorizing General Jackson to pursue the Hostile Indians into Florida" (1819); "Speech in the Senate on Nullification and the Tariff " (1831); "Eulogy on Andrew Jackson " (1845); "Speech on giving his Casting Vote on the Tariff of 1846 " (1846); "Vindication of the Vice-President's Casting Vote in a Series of Letters" (1846); " Speech to the Citizens of Pittsburgh on the War, Slavery, and the Tariff" (1847); "Speech to the Citizens of Philadelphia on the Necessity of maintaining the Union, the Constitution, and the Compromise" (1850). A "Series of Letters from London," written while he was minister there, in 1856-'60, was edited and published by his daughter Julia (Philadelphia, 1869).

--The third son of Alexander James Dallas was a lawyer and judge in Pittsburgh, Pa.--The son of George M. Dallas, Philip Mifflin Dallas, born in 1825; died in Philadelphia, Pennsylvania, 8 March 1866, was a lawyer practicing in Philadelphia, and, while his father held the English mission, was secretary of legation in London.

--Robert Charles Dallas, author, a brother of Alexander James Dallas, born in Kingston, Jamaica, in 1754; died in Normandy, France, in 1824, was educated under Mr. Elphinston, studied law in the Temple, returned to Jamaica at the age of twenty-one, married in England three years later, and returned to Jamaica to fill a lucrative post, but gave it up on account of his wife's health, and resided in France until the French revolution. He then came to the United States, but was not pleased with the country, and consequently returned to England, where he followed a literary career. He was a friend and counsellor of Lord Byron, the poet, whose uncle, Captain Byron, married his sister. Among his publications were "Poems," "Lucrecia, a Tragedy, and Moral Essays" (London, 1797); "Aubrey," a novel (1804); " Memoirs of Marie Antoinette," from the French of Joseph Weber (1805); and many more translations and original tracts in defense of royalty in France, and in condemnation of the Revolution; " The Morlands, Tales illustrative of the Simple and the Surprising" (1805). In the year of his death he published "Recollections of the Life of Lord Byron from 1808 to the End of 1814."

--His son, Alexander Robert Charles Dallas, after serving with distinction as a British officer through the Peninsular war and at the battle of Waterloo (where his cousin Charles was wounded), entered the Anglican priesthood, following his cousin's example, and became eminent as the organizer of missions in the west of Ireland. He was the author of many popular devotional books.--Another distinguished member of the family in Great Britain was Sir George, a political author, born in London in 1758; died in 1833. His principal publication was a work entitled "Thoughts on our Present Situation, with Remarks on the Policy of a War with France" (1793).