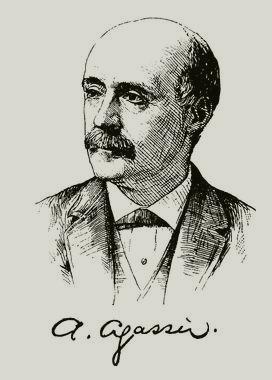 AGASSIZ, Alexander, naturalist, born in Neuchatel, Switzerland, 17 December 1835. He is the only sort of Louis Agassiz by his first wife, and he followed his father to the United States in 1849 His early education was received abroad, and after his arrival in this country he prepared for Harvard, graduating in 1855. Then he studied engineering at the Lawrence • scientific school, where in 1857 he received the degree of born S., after which he took a further course in the chemical department, and also taught in his father's school for young ladies. In 1859 he went to California as an assistant on the coast survey, and was engaged on the northwest boundary. He collected specimens for the museum at Cambridge, and visited the principal mines. In 1860 he returned to Cambridge and became assistant in zoology at the museum, taking charge of it in 1865 during his father's absence in Brazil. In 1865 he became engaged in coal mining in Pennsylvania, and during the following year in the copper mines of Lake Superior, where he was engaged until 1869 as superintendent of the Calumet and Hecla mines. He developed these deposits until they became the most successful copper mines in the world, and from the wealth they have brought to him he has made gifts to Harvard amounting to over $500,000. During 1869-'70 he visited Europe and examined the museums and collections of England, France, Germany, Italy, and Scandinavia. On his return in 1870 he resumed his duties at the museum in Cambridge, of which he was made curator, on the death of his father in 1874, and remained as such until 1885, when he resigned, owing to ill health. During the summer of 1873 he acted as director of the Anderson school of natural history, and in 1875 he visited the western coast of South America, examining the copper mines of Peru and Chili, and making an extended survey of Lake Titicaca and collecting for the Peabody museum a great number of Peruvian antiquities. He afterward went to Scotland to assist Sir Wyville Thompson in arranging the collections made during the exploring expedition of the "Challenger," part of which he brought to this country. He wrote one of the final reports on the zoology of the expedition, those on Echini. From 1876 to 1881 his winters were spent in deep-sea dredging expeditions in connection with the coast survey, the steamer "Blake" having been placed at his disposal for this purpose. Mr. Agassiz was a fellow of Harvard College till 1885, and has served as an overseer. He is a member of the national academy of sciences, of the American association for the advancement of science, being its vice-president during the Boston meeting of 1880, of the American academy of sciences, and of numerous other scientific societies of this country and Europe. His publications, in the form of pamphlets, reports, and contributions to scientific periodicals and the proceedings of societies, are very numerous, and are principally on subjects connected with marine zoology. Most of these are to be found in the bulletins and memoirs of the museum at Cambridge. It has been said that he is "the best authority in the world on certain forms of marine life." He is the author, with Mrs. Elizabeth C. Agassiz, of "Seaside Studies in Natural History" (Boston, 1865); of "Marine Animals of Massachusetts Bay" (1871), and of the fifth volume of "Contributions to the Natural History of the United States," left incomplete by his father.

Start your search on Alexander Agassiz.